A lot went down at the 2017 Grammys. Beyoncé performed what was described mostly as a religious experience, Adele took home Best Album, and hip-hop artist Lil Yachty rode a T3 SWAGTRON hoverboard.

All right, pause. Let’s break this down.

Lil Yachty, known for his “One Night” music video, appeared in a blowout Target ad riding our T3 hoverboard that aired during the 59th Grammys Award Show. Joined by Canadian singer of “Call Me Maybe” fame, Carly Rae Jepsen, Lil Yachty performed a remake of Rob Base and DJ E-Z Rock’s 1988 hip-hop classic “It Takes Two.” 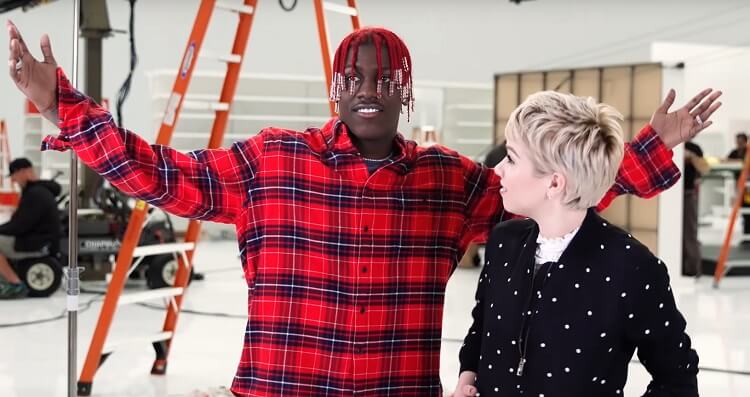 The ad was part music video and part commercial, but all talent. Seriously.

Bankrolled by well-known producer, Mike Will Make It, the commercial was directed by Roman Coppola (ala the Amazon web series, Mozart in the Jungle) and choreographed by La La Land’s Mandy Moore (not to be confused with the actress/singer Mandy Moore). All these elements rolled into one make for an epic and elaborate 3 minutes of dancing and rapping.

“It was pretty cool remaking such a big song,” Lil Yachty states in the video. “There was a lot of pressure.”

At the 20 second mark, Lil Yachty makes his big entrance as glass doors decked out in Target’s logo open, and out he glides on a signature Target-red T3 hoverboard wearing a VR headset.

Just when we thought things couldn’t get any better, we were featured again in their Behind The Scenes video where we got a chance to see the tremendous amount of effort that went into everything.

“It takes village,” Jepsen joked before breaking off in a laugh. “Yeah, it takes way more than two.” Lil Yachty agreed.

During the video we also see Lil Yachty practicing and playing around more on the T3. He does a few simple spins on it – while wearing the VR headset, making it….not so simple. Meanwhile, we think we may have spotted some of the dancers doing some awesome moves with our new T5?

But what exactly IS the T3 and why is it in this collaboration?

The T3 is called the “flagship” of our line self-balancing scooters (AKA: hoverboards). It sports dual 300-watt motors and can reach up to a max speed of 8 miles per hour if you’re brave enough – not too bad for a little board. We also updated it with our innovative phone app, which seamlessly pairs with either Android or iOS devices. You can retrace your ride or commute by checking out your route history, switch speed at the tap of a finger, and stay up to date on your battery life. The Bluetooth speakers enable any rider to play their favorite tunes to spice up a tedious commute or let pedestrians know they’re coming. Not to be outdone, we also outfitting it with LED turning turn signals.

Not convinced? You can buy any of our whips with confidence – all of our lithium-ion powered hoverboards are UL 2272 certified and a one-year warranty, making us one of the top brands of personal transportation electronics.

If you haven’t watched the “It Takes Two” remake or the Behind The Scenes bonus video, you really should check it out for yourself. It didn’t win any Grammys, but hey, they totally won our hearts.