We’ve always believed in the star power of our lineup of self-balancing hoverboards, from the classic design of our Swagboard T5 to the ultra-durable T6 Outlaw. Now it seems there’s a new star on the horizon — the Swagboard T580 Vibe. And it’s got its first starring role!

But the T580 Vibe hoverboard shows up in a scene in Netflix’s latest rom-com, “Someone Great,” an entertaining romp through New York City as three friends reach turning points in their lives. It stars Gina Rodriguez (of“Jane the Virgin” fame), DeWanda Wise (from Netflix’s “She’s Gotta Have It” series) and Brittany Snow (“Pitch Perfect”). 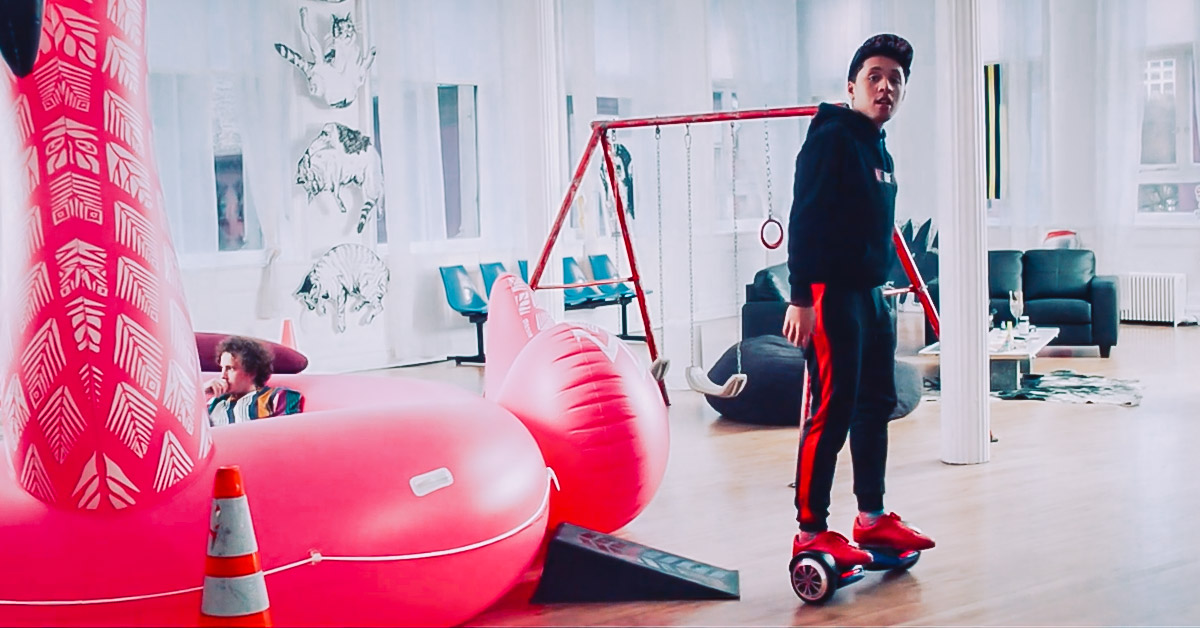 The Vibe is a lot of things. It’s a feature-packed hoverboard with Bluetooth connectivity and ultra-responsive controls. It’s one of our top sellers. Now, we can add “movie star” to that list, thanks to “Someone Great,” which also features cameos from Questlove, Jessie Reyes and RuPaul.

From “To All the Boys I’ve Loved Before,” “The Kissing Booth,” and “Always Be My Maybe,” Netflix has been on a roll lately with their lineup of hit romantic comedies. With its charming vibe, relatable story and stunning lead actors with undeniable chemistry, we can add “Someone Great” to that list.

About the Swagboard T580 Vibe Hoverboard

Hop on the ever-popular Swagboard T580 Vibe and bring the noise. Cruise up to 7.5 miles per hour for a max. range of 8 miles on a single battery charge. Or climb those 30-degree hills on campus and get to your next class with time to spare.

Download the SWAGTRON companion app, compatible with iOS and Android, and unlock advanced features. Check battery life, monitor system stats, track your route and more. Use the app to play music on the Vibe T580’s built-in dynamic Bluetooth speakers, or switch riding modes between “Learning” and “Standard.” Ready for a challenge? Activate “Advance mode” from the app and unleash beast-mode!

Fully loaded. Feature-rich. And now, “movie star.” This is the Swagboard T580 Vibe.

Released on Netflix on April 19, “Someone Great” focusses around Jenny (Rodriguez), a music journalist in New York City who decides to pursue a job at Rolling Stone magazine in Los Angeles. The movie takes place over the course of a single day, just hours after Jenny breaks up with her long-term boyfriend. The day is one last hurrah, one final wild day together in New York City with her two closest friends — Erin (Wise) and Blair (Snow).

Hilarious, heartfelt, sometimes outrageous, but always relatable. “Someone Great” is a romantic comedy about love, loss, growth and the powerful bond of friendship.

If you haven’t already, check out the trailer:

Official “Someone Great” Playlist from Spotify

Much of the story features Jenny (Rodriguez) coping with the breakup with the help of her two best friends and the great city of New York. As their adventure unfolds, music triggers powerful memories of Jenny, her boyfriend and their relationship of nine years. As you can imagine, music plays a pivotal role in how the story plays out and how we interact with Jenny, her struggle and her growth.