That was the sentiment we heard from Swagtron employee Nate, when on the topic of personal fitness and electric bikes. Anyone who tries to start an exercise program knows how difficult it is to stick with it for more than a couple weeks.

“I had just turned 40 and I was sick and tired of feeling sick and tired. I needed to get in better shape. But running? Jogging? Nope, that’s a recipe for disaster — out of the question!”

For someone like Nate, biking is a great option. But he had the same obstacle with jogging that he had with the idea of cycling: mobility.

“Bad knees,” Nate admits. “I’m out of shape to begin with, and we have a lot of hills in the neighborhood. Some are a bit too tough to walk up, let alone bike.”

Everyone understands that some discomfort is expected with any exercise routine. After all, they don’t say “feel the burn!” because it’s pleasant! But physical pain associated with bad hips, knees, or back is a lot to push through. And pain from even minor injuries are also a factor in exercise abandonment.

Nate thought about using a power-assisted bicycle to help boost is fitness level and get him exercising more. But using an eBike for exercise yields a lot of finger-wagging from some naysayers

“Will using an electric bike improve your health?”

“If you’re using an eBike, are you even exercising, bro?”

How Does an Ebike Work?

Quite simply, an electric bike is built just like a traditional bicycle: seat, handlebars, and two tires. But it’s powered by a battery and motor.

A lithium ion battery sends an electric current to a small motor, which spins your wheels. There are two main differences in power assisted bicycles: the type of motor, and the type of speed controller.

Depending on the type, an eBike might use its power system for one of two reasons: make pedaling easier for the rider or cruise without pedaling at all.

There are two main types of ebike controllers on the market: Pedelecs (or Pedal Assisted Bikes) and Throttle ebikes. The pedal-assist bicycle uses a sensor to turn on the motor, while the throttle ebike uses a twist grip or button instead. Some motorized bikes have both built-in, for the best of both worlds.

You’re probably familiar with how a throttle works: it’s what you would see on a motorcycle. Twist the throttle or push a button to speed forward. On a motorbike, the throttle controls how much gas and air goes to the engine. This makes it surge forward.

An e-bicycle doesn’t use gas. So instead, the throttle tells the electric motor to turn on or go faster. A foldable ebike like our Swagcycle Pro uses this system. For this reason, some people think of a throttle-only ebike more like a seated electric scooter than a bike.

If you just want to press a button and cruise without pedaling, this is the choice for you.

Pedal assist kicks the motor on while you pedal. This feels the same as riding a traditional bike, but on steroids. You can go faster and go over rough terrain without wearing yourself out. Pedal assist lets you get a good workout without hitting “the wall.”

There are two main implementations of pedal-assisted bikes on the market: the torque sensor system and the cadence sensor system.

Cadence Sensor.
The cadence sensor provides a pre-set amount of power when you get to a certain speed. This is also called “pedal to go.” This powered assistance is constant and doesn’t change just because you’re pedaling less.

With ebikes, the biggest advantage comes from climbing hills. But sometimes you’ll get to a beast that’s too much to climb, even with an electric boost. This is why some pedal-assisted bikes, like our top-selling dual-mode ebike the Swagtron EB-6, have a throttle as well.

This lets you muscle up a hill or engage cruise control when you need a break. Riding longer and farther without getting tired is a huge benefit to those with minor mobility issues. 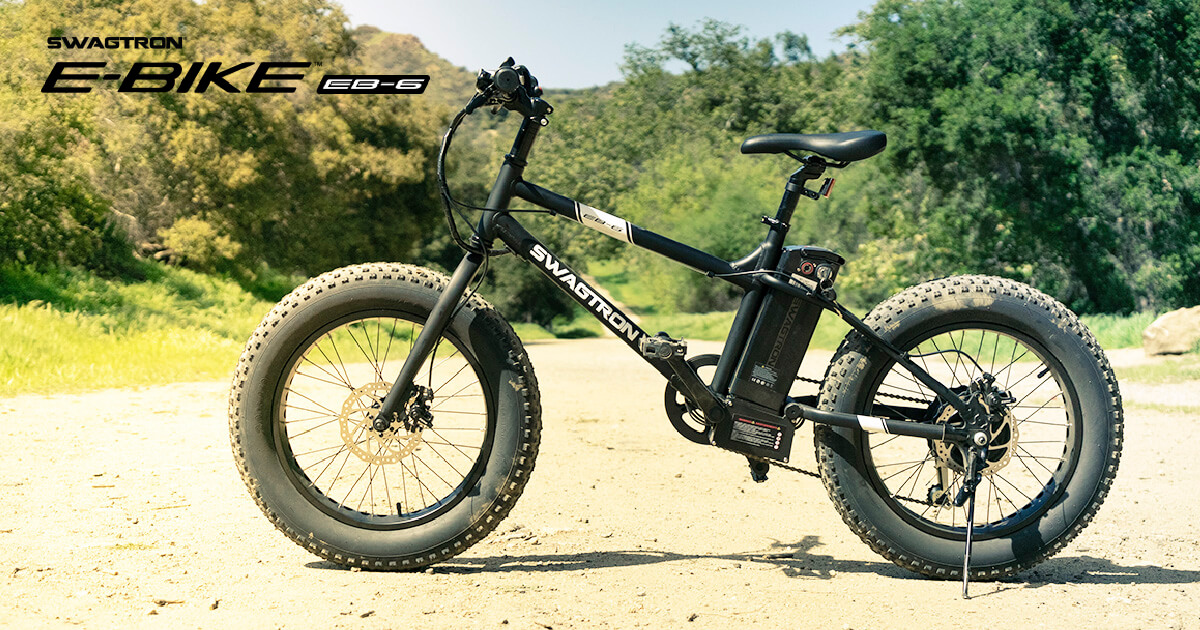 For an electric bike, the type of motor is uses is just as important as its pedal control system. There are two main types of motors: hub and crank. They both have their advantages and disadvantages. How you ride and why you’re riding would dictate which one is better for you.

Hub motor.
A hub motor is the most popular type of motor for power assisted bikes. Hub motors attaches to the rear wheel. They work by using electricity to repel magnets, which spins the wheel. Hub motors are at their best at medium to high speeds on flat ground or gentle slopes.

They are more durable than crank motors and typically last longer. They’re also less likely to get damaged if you run over a rock or crash. But hub motors mount in the back instead of the middle of the bike. This affects your balance if you’re off-roading or making sweet jumps.

Crank motor.
A crank motor — also called a mid-drive motor — is more tightly integrated with the gear system. Ebikes that use crank motors really shine on steep hills and shifting gears feels more fluid than with a hub motor.

But you have to get the bike up to speed, though: it doesn’t have that immediate zip that a hub motor has. If you want to hop on your ebike and take off at warp speed, a mid-drive motor isn’t for you.

How Can an eBike Improve Your Health & Fitness?

So can you use an electric powered bike to get exercise? Yes, you can! And never let anyone tell you otherwise. 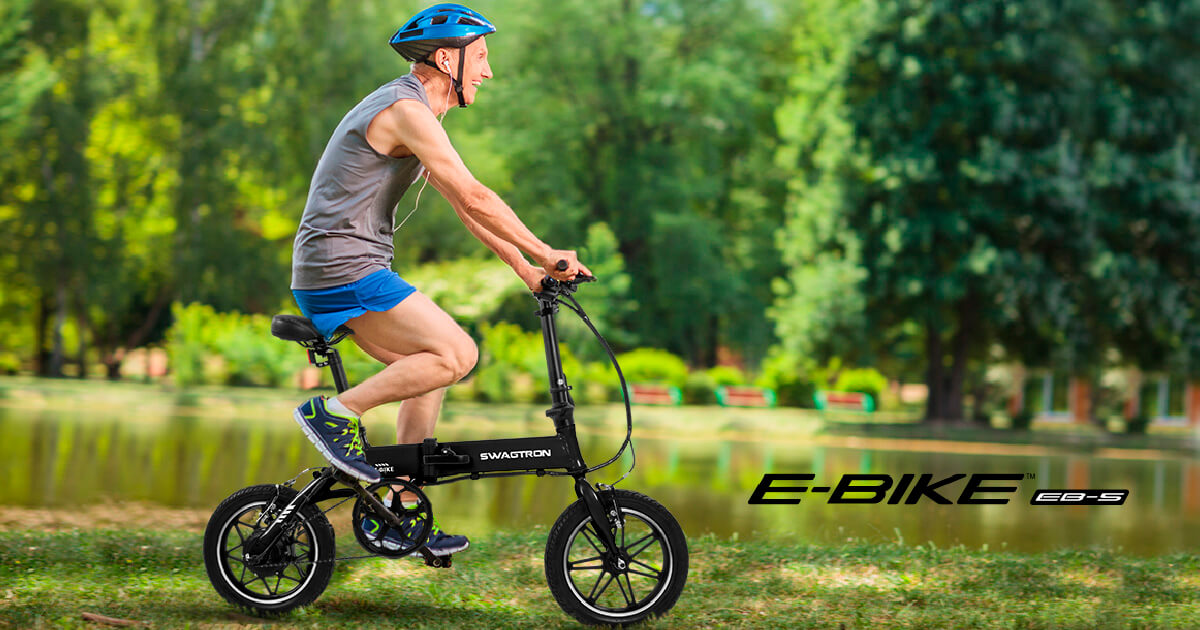 It’s totally possible to use an ebike to enhance your exercise routine, especially if you choose a pedelec bike. The beauty of an electric bike is that you can put in as much — or as little — work as you want. In fact, you have more control over your workout when you use a pedal-assist ebike.

Knees starting to ache? Ease off on the pedaling and let the pedal-assist pick up the slack.

Getting tired but you’re not ready to quit just yet? Use Throttle Only mode and take a quick breather without stopping.

Hilly road steeper than you thought it would be? Push the throttle and beat that incline like it owed you money!

You’ll be able to push through your workout and ride longer with a pedal-assist bike. The more you ride, the less likely you’ll be to stop. This will go a long way for improving your cardiovascular fitness and your blood pressure.

A new study done by the University of Colorado Boulder showed that cycling regularly on an electric bike is an effective workout that can improve cardiovascular health. The study also showed that people who were previously sedentary benefited from using a pedelec bike on a regular basis.

Is It Working for Nate?

Nate eventually purchased his own SwagCycle EB-6, which has the fatter tires needed for the rough terrain on his bike route. Has having the pedal-assist bike helped him stay on track with his routine?

“It’s only been a few weeks, but I already know that a boosted ebike was a great choice for me. Some people think you can’t get a decent workout with an ebike. Believe me — that’s not true!” 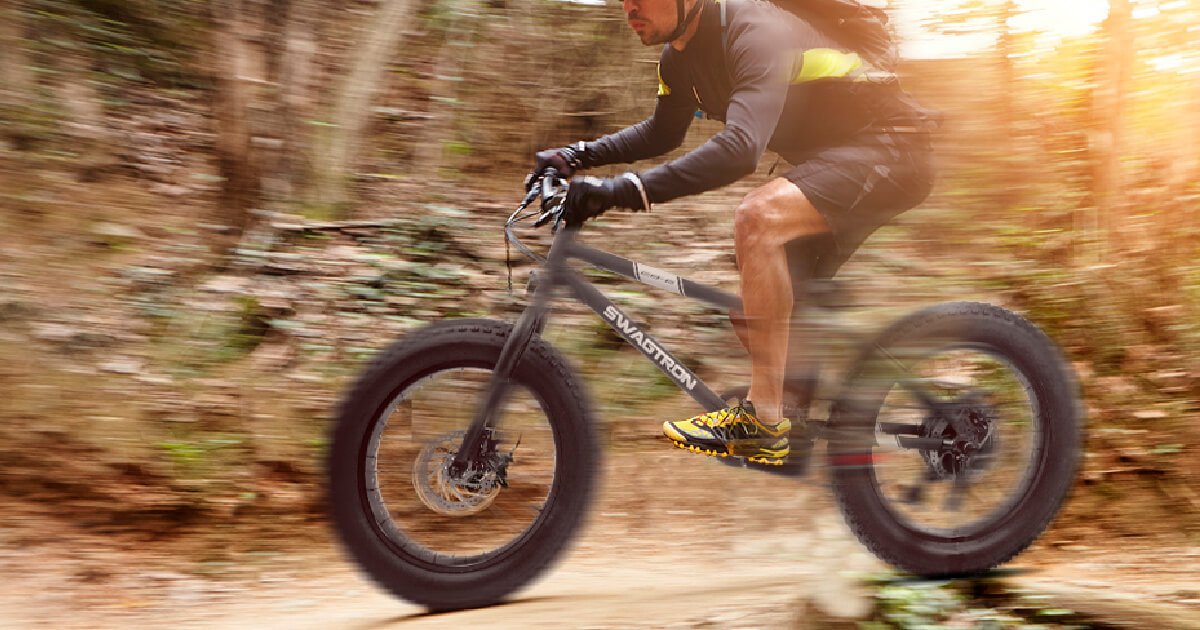 Keen on data, Nate installed a fitness app on his phone to track his workout and compare how many calories he burned with and without pedal assist.

“I burned a lot of calories either way,” Nate said. “I burned about 25% more when I rode the same bike route without pedal assist. But I could barely finish! I doubt I’d ever try again.”

The power assist offered by the electric bike helped Nate start a fitness routine that he can stick with. And who knows? After a few weeks of using the pedal assist less and less, maybe he’ll be ready to tackle his bike route all by himself!