Doug Long just got out of prison.

The 58-year-old slings a large backpack over his shoulder and places a black, bucket-style helmet on his head, securing the straps beneath his chin. The brown, stone building looms ominously over him. Its presence is medieval, castle-like with turrets and merlons. With a twist of the throttle, he silently zips away.

It’s all in a day’s work for the Lackawanna County information technology and mailroom worker.

The 13 blocks to the Lackawanna County Prison and back to the capitol in Scranton, PA, is the longest run of the day on his Swagger 5 Elite electric scooter.

Back in his mailroom office in the basement of a six-story building next to the courthouse, he sits behind a desk surrounded by plastic, rectangle mail buckets. Highly confidential mail and other important documents have been sorted and delivered to and from judges, county commissioners and even inmates. The Swagger 5 Elite is plugged in next to him, charging. He’s ready to turn out the lights and call it a day but takes a few minutes to tell me over the phone how an electric scooter more than doubled his efficiency on the job.

“It changed my life,” says Long. “I never believed in my lifetime I’d be finishing my retirement delivering mail on a SWAGTRON.” 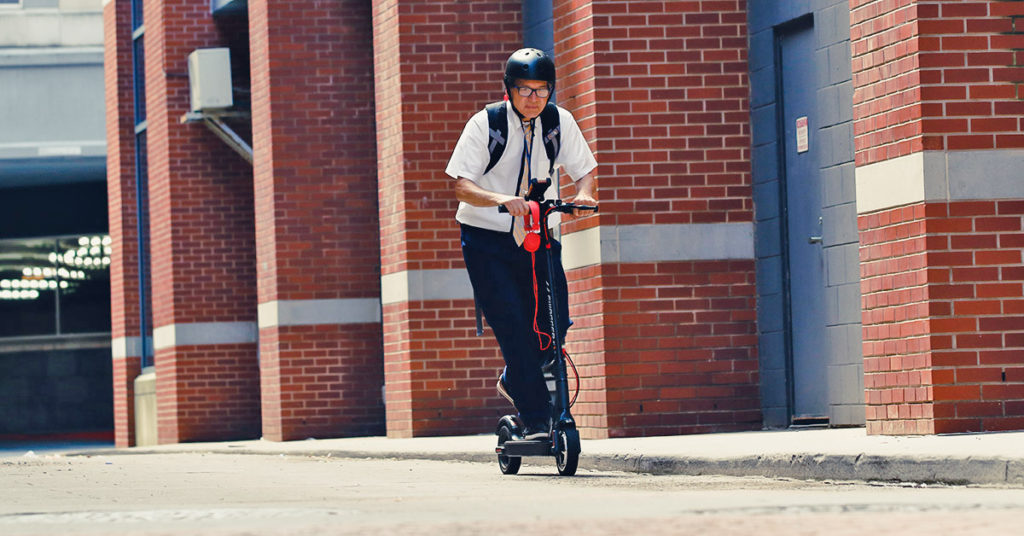 Long, a long-time boxing promoter by night who raises money for veterans and service dogs, is single-handedly transforming the way official Lackawanna County mail and documents are delivered by day.

It’s his fourth year working for the county. But prior to this he spent three decades working for CinRam, Intl. where he claims he had a role in the development and implementation of CDs and DVDs. When the company shut its doors for good in 2015, Long found the perfect gig to ride out the time he had left until retirement in the county mailroom. But he says he enjoys it and it doesn’t really feel like work. Especially now that he has a new ride.

“I’m living my dream now delivering mail on the Swagger 5 Elite after 35 years in the factory. I’m going to live that electric life until I retire.”

“I’m living my dream now delivering mail on the Swagger 5 Elite after 35 years in the factory. I’m going to live that electric life until I retire,” says Long. “It’s really had an emotional impact on me.”

It all started when he was visiting a cousin in New York City and saw a courier scoot by on a SWAGTRON. He quickly pulled out his smartphone and recorded what he could of the stranger effortlessly navigating the concrete jungle of Manhattan. It was the first time he’d seen someone on an electric scooter and he knew almost instantly he had to have one. 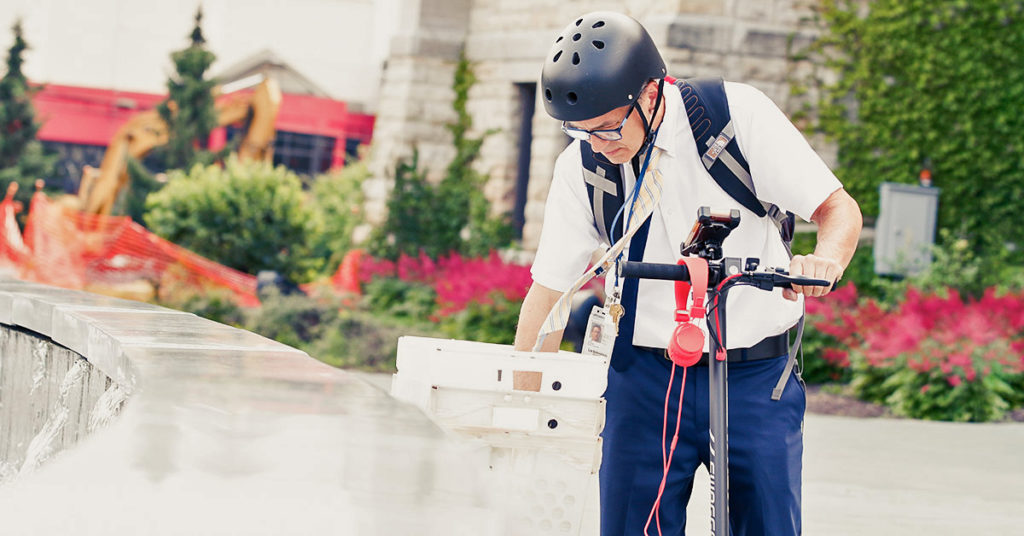 Back in Scranton, he went to work selling the idea to county commissioners.

He showed them the video on his phone.

He explained how much more efficient he could be at his job.

There were more meetings.

Finally, the magic words: “Let’s give it a try.”

After signing some liability release forms, Long purchased his very own Swagger 5 Elite electric scooter and began a 30-day trial period using it on the job.

Scooting between county buildings—some of which are several blocks apart—Long delivers mail and couriered documents, warrants, PFAs and releases to be signed.

He used to only make it to two or three buildings per day. Now he’s able to get to at least six.

Certified mail that used to have to wait until the next day to go out now regularly goes out the same day by 3 p.m.

Processes that used to take a full eight-hour day are now completed in 15 to 30 minutes. 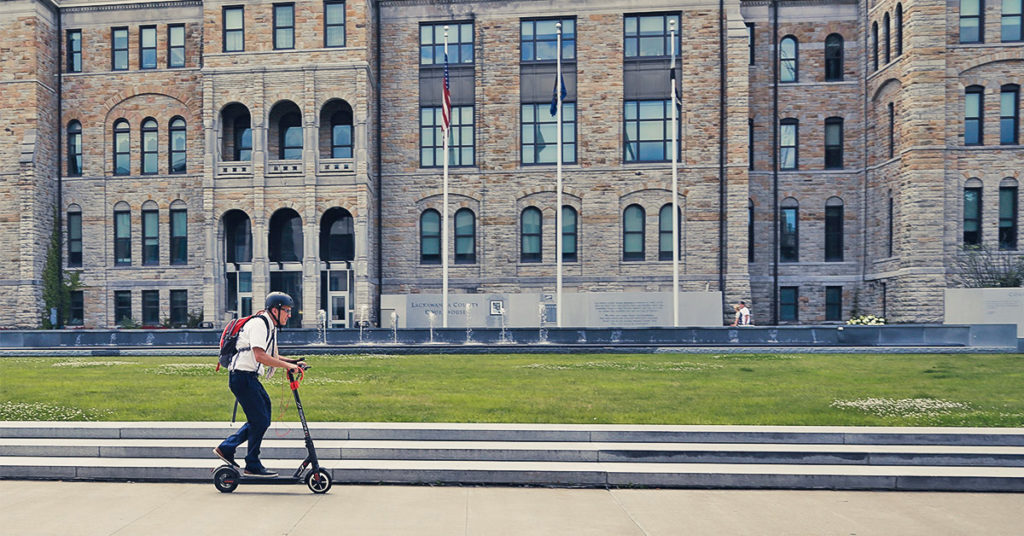 But at the prison is where it’s had possibly the greatest impact, Long says. Inmates are actually being released sooner. The process of delivering release orders from the prison to judges to be signed and back used to take a day or two. Now it’s done in a matter of minutes.

Not only is their freedom no longer delayed, fewer nights spent and meals eaten mean the county is saving money, too.

Commissioners used to receive complaints about delays on time-sensitive documents. Then they started receiving emails praising how quickly everything was happening. Then came the email.

The director of the prison’s work release center emailed all the commissioners: “Please keep Doug on the Swagger.”

It was official: it was no longer a trial period. 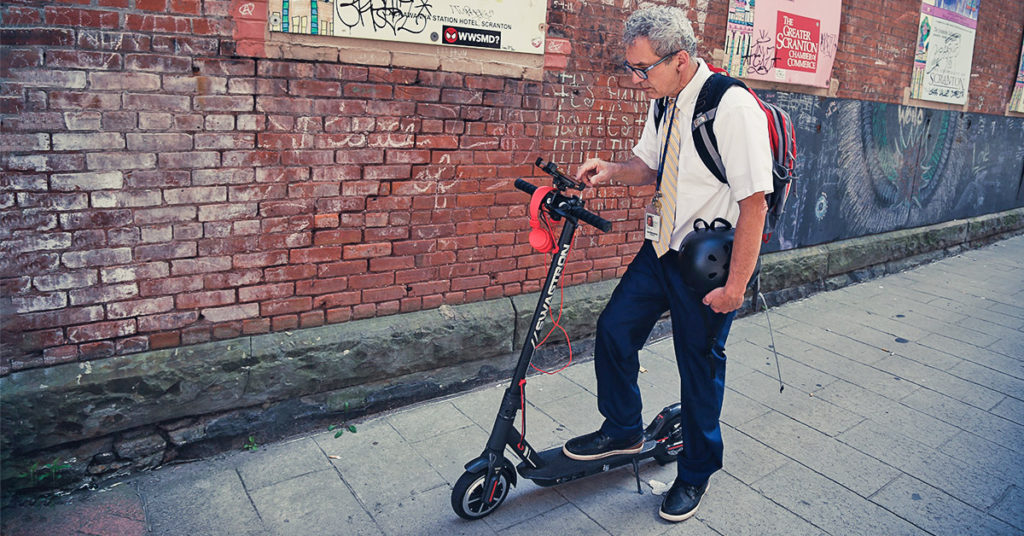 He chuckles as he points out the irony of the fact that the reason his electric scooter is such a game changer is because he’s living that electric life in an analog world.

“Everything has to have a paper trail,” he tells me. “No email. No digital signatures. Everything is paper driven. Everything requires a signature. That’s why I’m such an asset.”

With that, he shuts the lights off and I hear him lock the door. He continues our phone conversation as he rolls his Swagger 5 Elite onto an elevator, greeting colleagues. He pauses and I hear someone ask about the scooter. “It’s great,” he boasts. “It’s a SWAGTRON!”

“It’s very unique here,” he tells me. “I’ve become a public figure because of it.”

He asks me to hold on as he puts me on speaker and attaches his phone to the handlebar mount on the scooter. I can hear the wind as he picks up speed, but he continues to talk, telling me how he switched to a parking lot that’s almost eight blocks away—and $55 a month cheaper—than the closer lot where most of his colleagues park.

“It changed the way county mail is delivered,” he says. “And it’s already paid for itself in parking alone.” 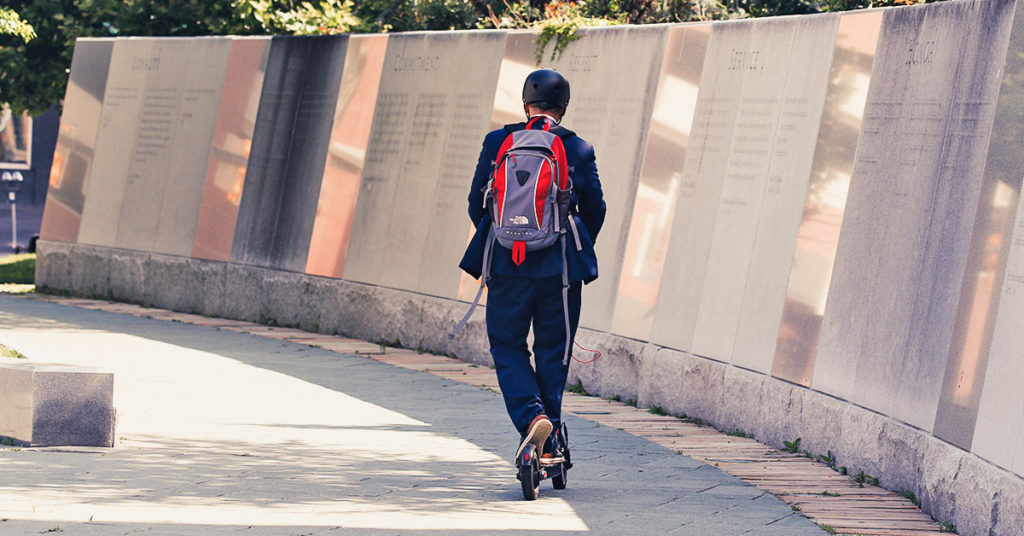