People call Travis Brewer a calisthenic ninja warrior of health and fitness. That’s quite a mouthful. But it sums Travis up in a nutshell. His swag led him to NBC’s hit TV show American Ninja Warrior as a finalist four years in a row. And he snatched the championship title at the World Callisthenic.org Champion of the “Battle of the Bars” competition. But it’s his work with our swagBOARD T6 that caught our attention.

We’ll get to that. But first, a question: What’s your beastmode? That thing in your life that gets you amped? That makes you the most dedicated, focused—ferocious! For SWAGTRON, it was our award-winning swagBOARD T6 hoverboard. And we’re giving one away.

Massive all-terrain 12-inch wheels with deep tire tread. A Bluetooth-enabled speaker to blast your favorite playlist as you go off-road. Intuitive app to monitor your GPS and system info, and switch riding modes. And the first and only hoverboard reinforced to support up to 420 pounds. And here’s your chance to unlock your beastmode and win one for yourself.

Disclaimer: Travis is a professional. Do not try this yourself. You may break your hoverboard—or worse, yourself.

Visit Travis’s Instagram on any given day and you’re likely to find him and his friends of superhumans pulling all sorts of crazy swag antics. We’re talking, balancing on a moving jeep. Balancing on skateboards. Doing handstands on a swagBOARD T6 hoverboard while balancing a full-grown man as a counterweight.

(Yeah, you read that right.)

But these are the kinds of challenges that Travis loves.

“When we train with electronics — like the T6 — we’re adding a level of complexity,” Travis tells me, “You have to constantly account for not only our balance, but the hoverboard’s balance.” Specs like miles-per-hour, travel range per charge and charging time are replaced with center of gravity and material stress. That’s why the T6, with its unmatched 420-pound riding capacity, was perfect for Travis’s next endeavor — America’s Got Talent. 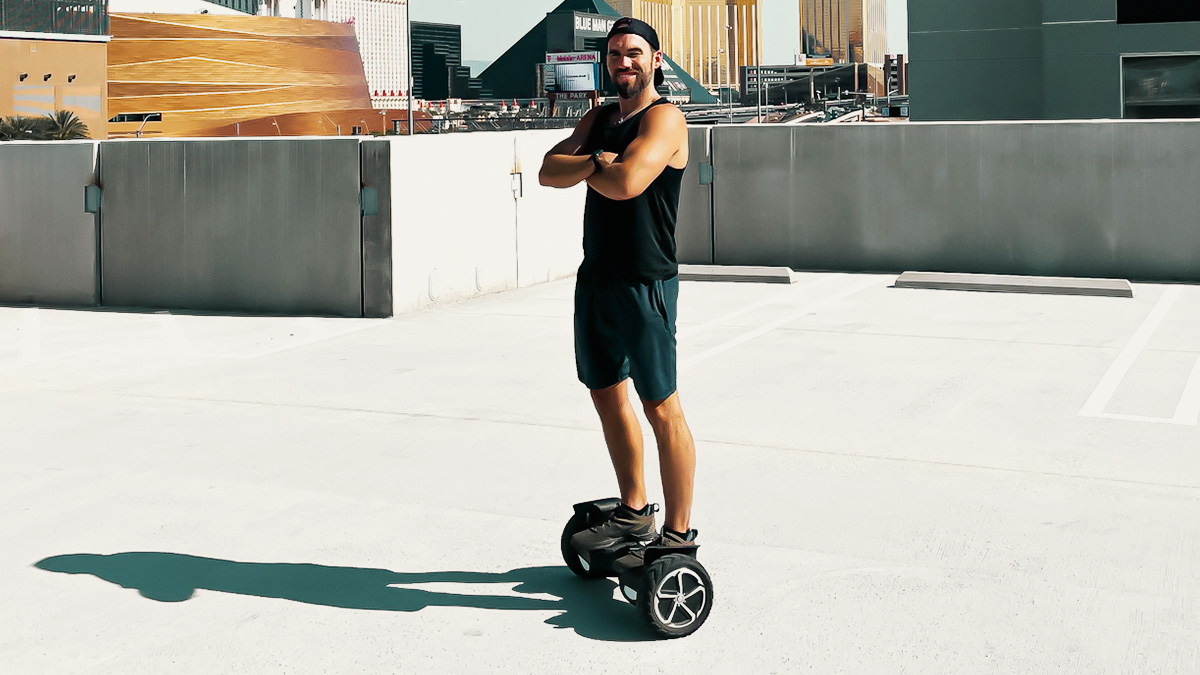 A ninja and his hoverboard.

He’s auditioned for AGT with best friends and fellow movement ninjas Andreas, Nathan and James. (Nathan and James perform with Cirque du Soleil, a troupe known for their wild acrobatic routines that laugh in the face of physics and defy gravity. Their first-round audition incorporated dumbbells. Next up? A Space Jam-inspired routine using hoverboards.

“That’s why we were drawn to the T6,” he admits. “We want to push the boundaries of what the human body can do, so we need a hoverboard that also pushes boundaries. And the weight limit of the world’s strongest hoverboard fits that bill.”

Disclaimer: Again, do not try this yourself. Travis and his fellow ninjas are professionals.

SO WHAT IS TRAVIS’S BEASTMODE?

“It’s different for everyone. But for me, it was yoga. More specifically, something called AcroYoga. It’s a blend of acrobatics and yoga. It opened my mind to other movements.” And from other movements came other energies, other people, other communities. “Yeah, that was my gateway into healthy life and healthy communities, my gateway into understanding that movement as medicine.” 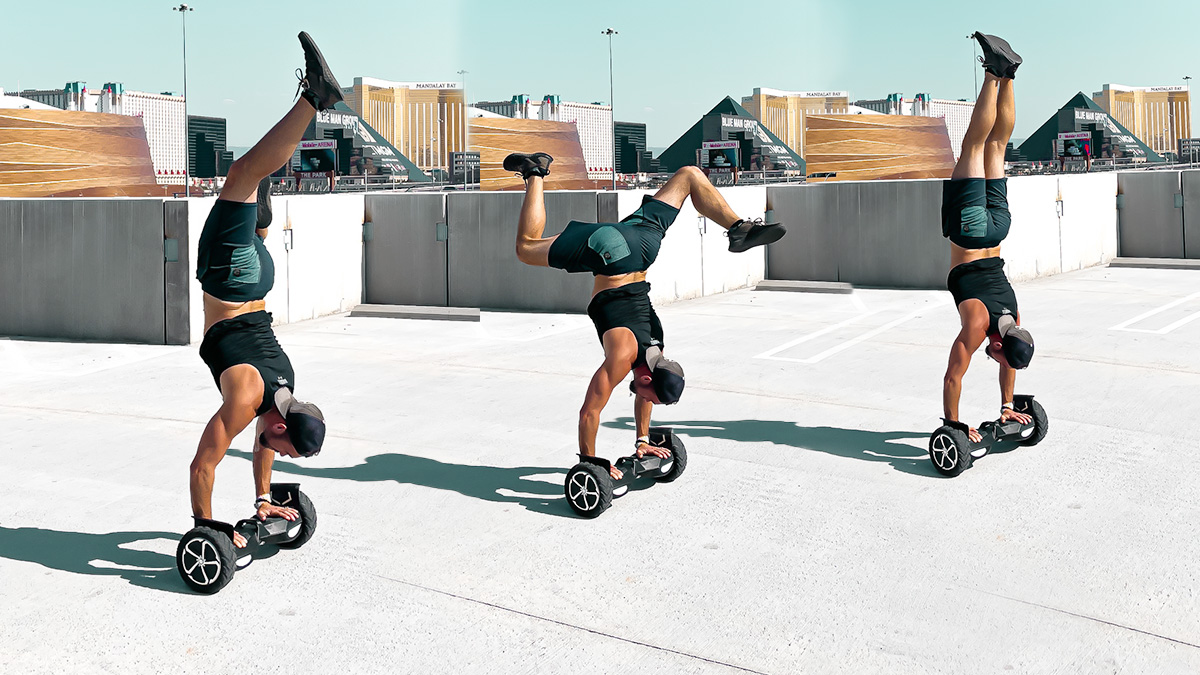 Okay, so we know what beastmode is. It’s important to understand what it isn’t.

Travis has said before that it’s about a warrior’s philosophy, living life with the utmost integrity. Challenging yourself to be the best you possible and raise your ceiling every day. It’s not about using anger or aggression as fuel for your workout or social interactions. For Travis, the best workout involves cooperative activities. In other words, play.

Need we say it? Travis and his PImovement crew are professionals. Do not try this yourself. You may break your hoverboard—or worse, yourself.

Play is important. Not just for kids, but for everybody. For Travis, play “connects you to your mind, body and spirit. Especially when you play outdoors. Play builds on important skills—risk assessment, learning boundaries, handling falls.”

This way of thinking was probably handed down to him from his parents. “As I could start walking and climbing,” he says, “I crawled onto the roof of the house.” After the first few times, his parents thought it best they get him into gymnastics where he can learn how to flip and dive. “And take a fall,” Travis adds. 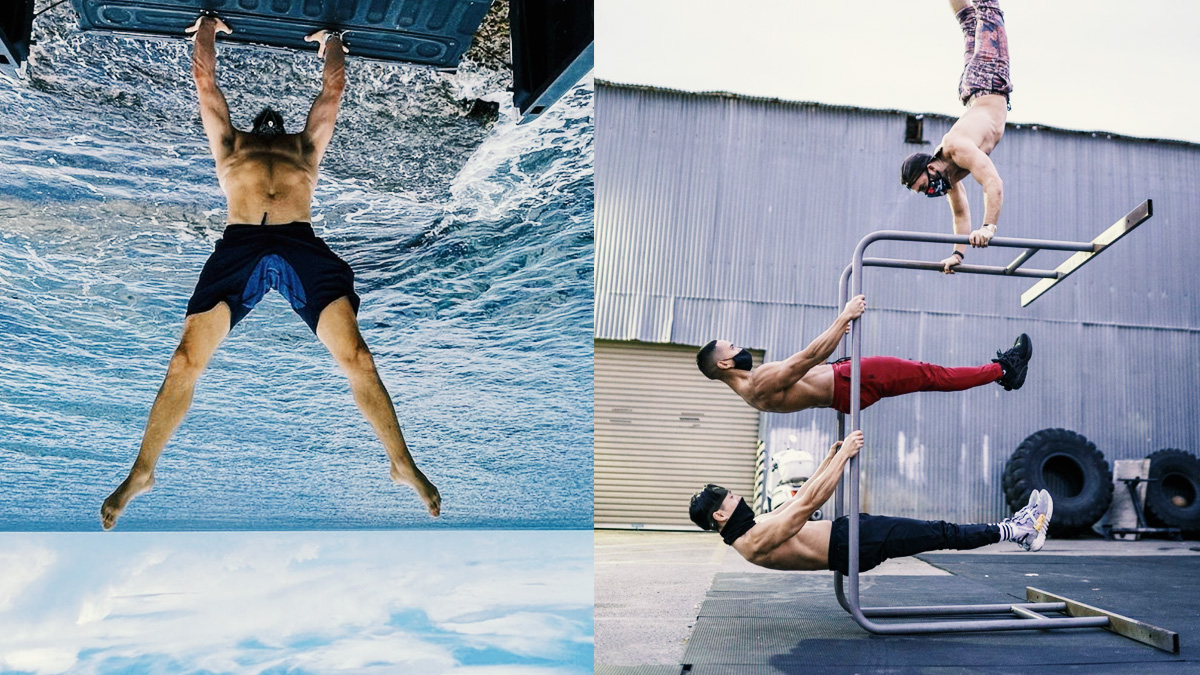 When Travis guides others on their fitness journey, he prefers to teach how to play. “How to get upside down. Counterbalance. Push-and-pull. How to fall. Because then you’ll know how to get back up.”

Movement is medicine. Even simple movement practices—walking around the block, anything. “Add play to it. Make it a game. Obstacle course training is a great example of that kind of gamification.” Which of course led Travis to American Ninja.

“Definitely, but even the stuff I did before that. I did a lot of competitions in middle school and high school. Then I started to realize that gymnastics-as-competition wasn’t really my thing. I was there for the social aspect, hanging out with friends on the team. Stuff like that.”

And play also helps build a sense of cooperation. “That’s why working out with a person is great,” says Travis. “And acroyoga is perfect for this. All of these fundamentals? I use acroyoga to teach them.”

Travis’s passion led him to found his own motivational lifestyle brand — PImovement.com. (PI stands for Positive Impact.) There, his mission is to spread positive energy through movement and help others attain their fitness goals. Through PImovement, he hopes to spread awareness for fitness parks and playgrounds around the world, and to raise funds to help build more of them.

And movement is medicine.