And “un-swag” definitely does not describe Tosh the Drummer.

What would we do without drums? They drive the song, move the party, and now they can boost your hoverboarding swag. The swagBOARD T580 Bluetooth Hoverboard features exclusive ground effects lighting that syncs up with your music, helping you keep the beat as you swag the pavement.

Listen to the Interview

“Be so good that nobody can’t hire you.”

That’s some great advice from Tosh (born Tosh Peterson) who is so damn good that anyone would be a fool for not booking him. Now twenty years old, Tosh started touring at the ripe “old” age of sixteen, banging skins for the likes of Nik West, Bryce Vine, Jxdn, Bazzi, Carlie Hanson, Bad Bunny and most recently Machine Gun Kelly.

Part of “being so good” comes from constant practice and an openness to learn and grow, both as a drummer and a person. This helped him take a chance and contact his #1 drumming idol Thomas Pridgen. That initial contact led to private lessons from Pridgen, himself — a drummer’s dream! — which in turn sparked a friendship that’s still going strong today. 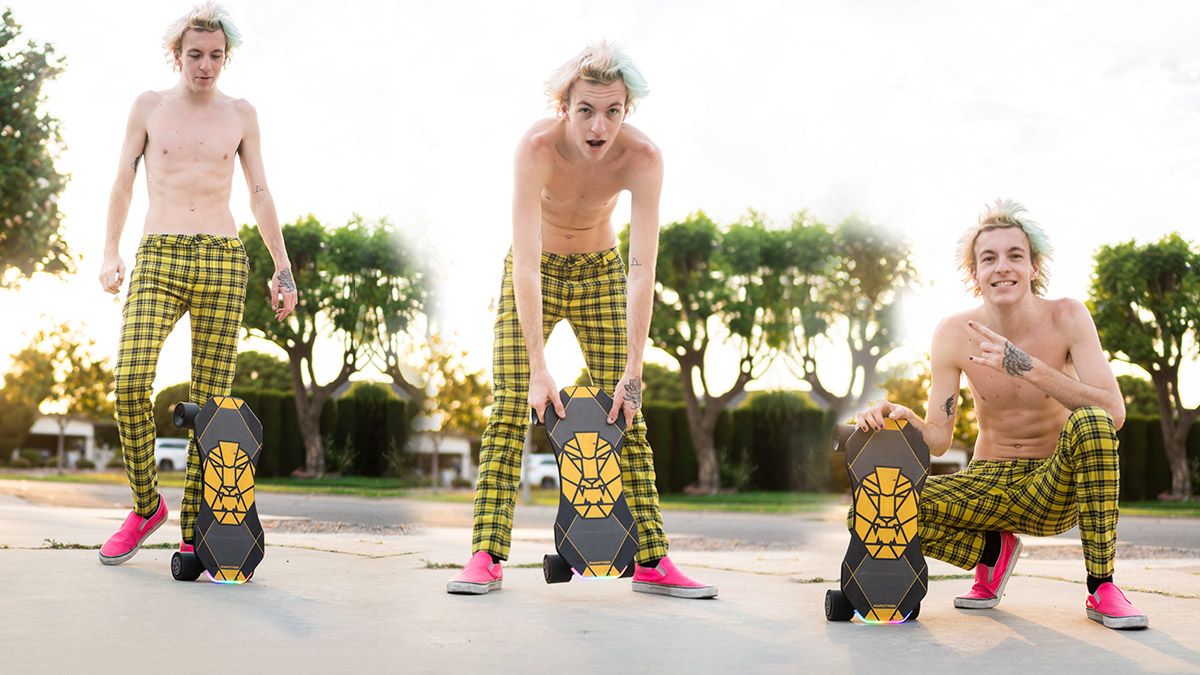 Tosh and the A.I.-powered swagSKATE NG3 Electric Skateboard — as smart as they come.

The Start of Something SWAG

Much like another swagTEAM artist Saxl Rose, Tosh started by posting a lot of “drum covers” on Instagram. “Honestly, I was making the videos to try and get Thomas Pridgen’s attention,” Tosh once jokingly admitted in an interview. “I wanted drum lessons.” Well, it worked!

That one moment taught Tosh a valuable lesson about the power of social media. “It was crazy, I realized then that anything’s possible online. Even if you think something won’t work—try it. Go for it.” Even his first touring gig came out of social media. 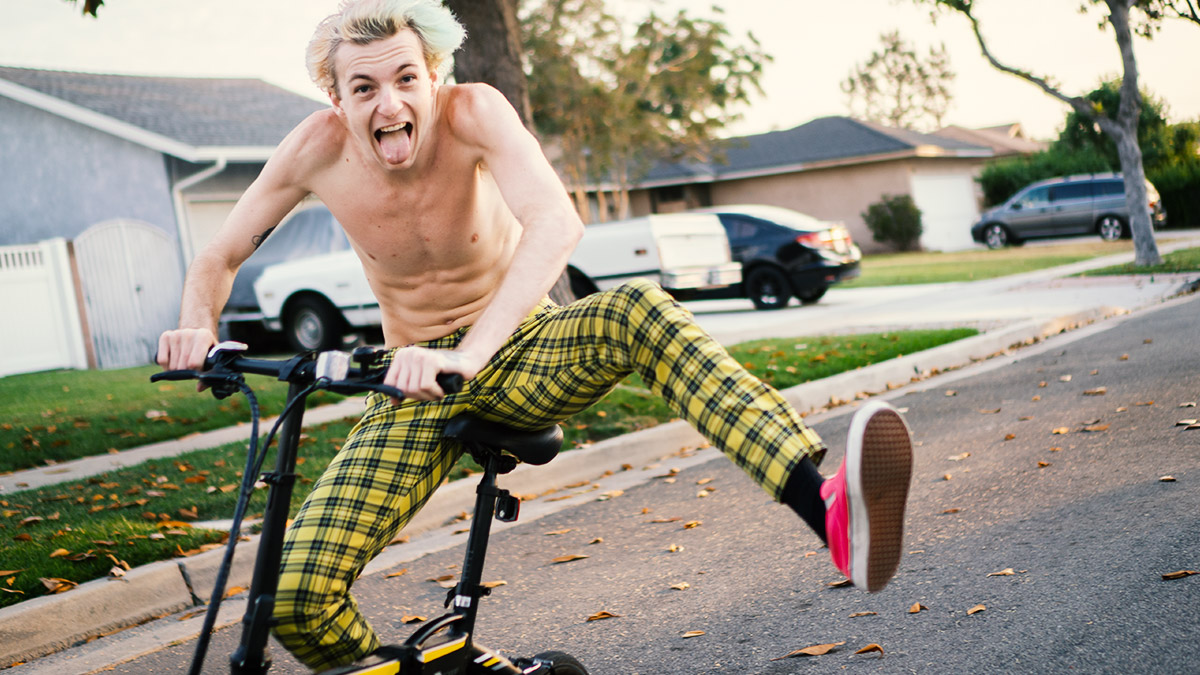 After a chance meeting with Nik West at a NAMM convention, Tosh came home and posted a West drum cover on Instagram. That grabbed the attention of West’s tour manager, who then reached out to Tosh. “She told me West was looking for a drummer for a tour and asked if I’d be down,” Tosh says. The manager asked him to learn two songs: 777-9311, by Prince for The Time, and The Chicken, by Dave Weckl — two notoriously difficult and complex songs for drummers.

“That song was the scariest thing I’ve ever had to do, learning that drum part,” Tosh admits. “I would watch videos of John Blackwell (r.i.p.) and Lil’ John Roberts playing the song.”

He auditioned (“I didn’t have to play those songs—but at least I know them now.”) and scored the gig. And he plays along to 777-9311 every now and again to remember that period in his life. “It was an exciting time.”

“I owe so much to Nik, because I learned so much on that first tour—from her and her band.” And not just music-related stuff. “Yeah, like being put in a holding tank in Russia because we were detained.” Scary stuff, especially for a then-sixteen-year-old drummer, touring for the first time.

From there, Tosh met and became cool with Machine Gun Kelly’s longtime drummer, JP Cappelletty (aka Rook), for a while. After an accident that left Rook unable to finish some MGK tour dates, Rook called Tosh up and asked him to fill in as drummer. Tosh’s energy and presence completely matched the energy MGK was giving off. Watch him on stage when he performs — he looks like he’s having fun because he is having fun.

And that fun, swag energy carries over off-stage, too. We learned that when we hung out with him in L.A.

We spent a day hanging out for this interview, which was originally meant to be a short photoshoot. But Tosh doesn’t do anything by halves. With Tosh, it’s all or nothing. And our “quick photoshoot” turned into a true adventure. Imagine this: the two of us, swaggin’ on Swagger 5 Boost electric scooters around the SWAGTRON warehouse. Then taking the party to his family’s home, where we rode EB5 Pro Plus eBikes and the A.I.-powered NG2 electric skateboard around his neighborhood. Not to mention the NG3 Electric Skateboard that he quickly fell in love with.

Oh, and making the best tacos ever.

But we’ll get to that a bit later.

A Family That Drums Together . . .

Tosh started drumming at the ripe old age of two, thanks in part to his father, who was the touring drummer for the band, English Beat, from 1995-2000. And musicality ain’t the only thing he got from his father. 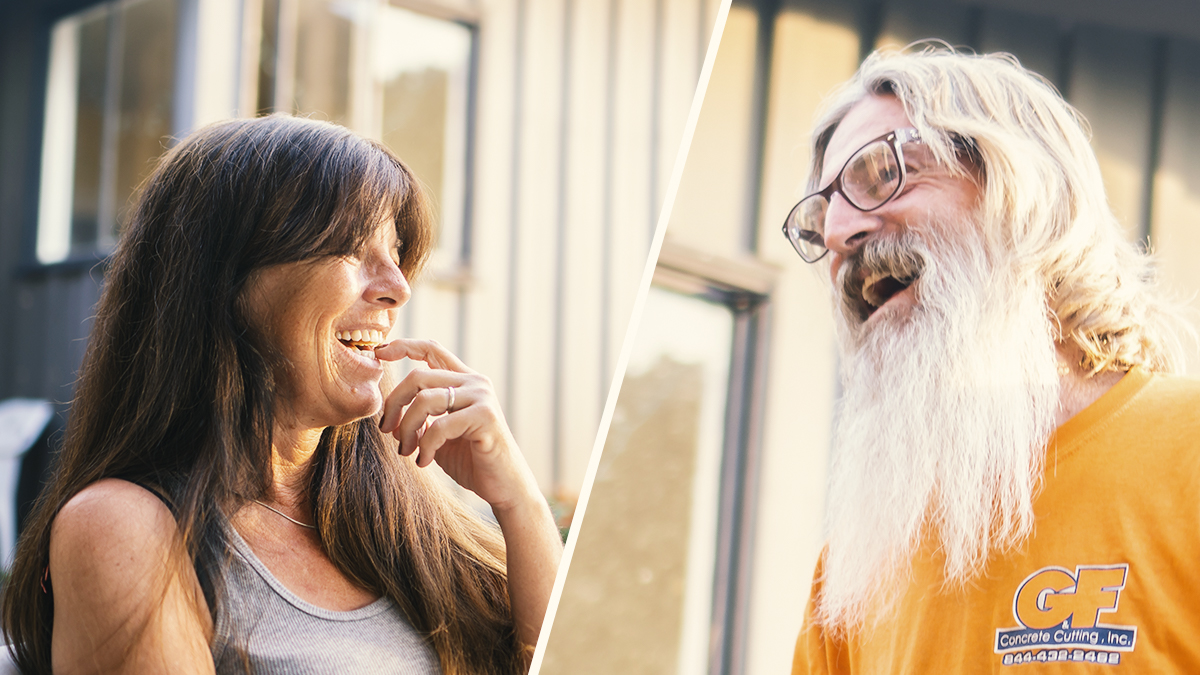 Swag parents for a swag kid.

We need to take a moment and give a proper shout to Stoner, Tosh’s swagAF dad. A Megadeth-bangin’, Snoop-Dogg-lovin’, great-name-havin’ dad if ever there was one. He put Tosh on that path to drumming greatness (thanks!) and is likely a fashion inspiration.

(If you get a chance, check out Stoner’s Instagram, where he poses with robes. Not kidding. It’s life-changing.)

“And he’s a great drummer, too,” Tosh admits. “He’s one of my biggest influences—even still.”

And again, we gotta talk about them tacos—a special recipe from his mom. But . . . we’ll get to that. 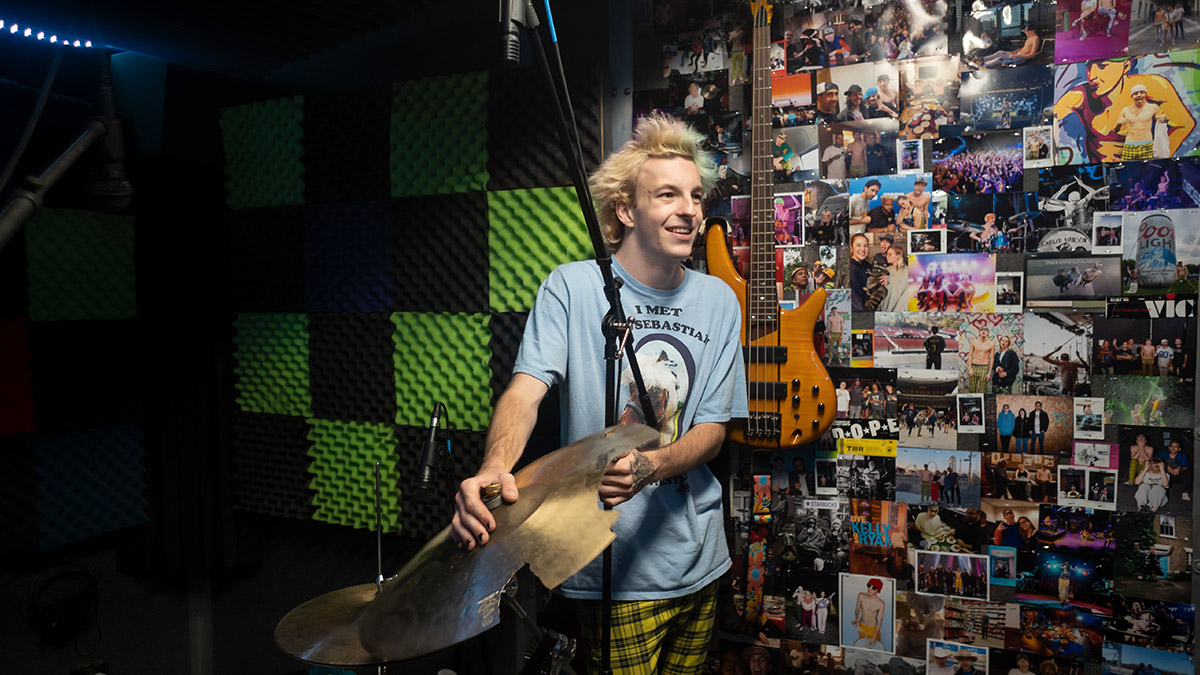 Check out Tosh’s epic music room, a converted garage that’s been properly soundproofed — though not swagproof — built by his dad.

Legendary drummer Toss Panos spoke often about dynamics of drum playing. “It’s not all just bang-bang-bang,” he told Drummer’s Resource back in 2018. Tosh’s playing makes it seem as though he has a deep, natural understanding of this simple fact.

Watch his drum performance during Nik West’s 2018 Montreux Jazz Talent concert and listen to his phrasing, how his drum fills don’t distract from the song, but enhance the song.

His ability to control the dynamics of his playing and adjust the “color” of every strike is on par with other drummers with 20+ years of experience. 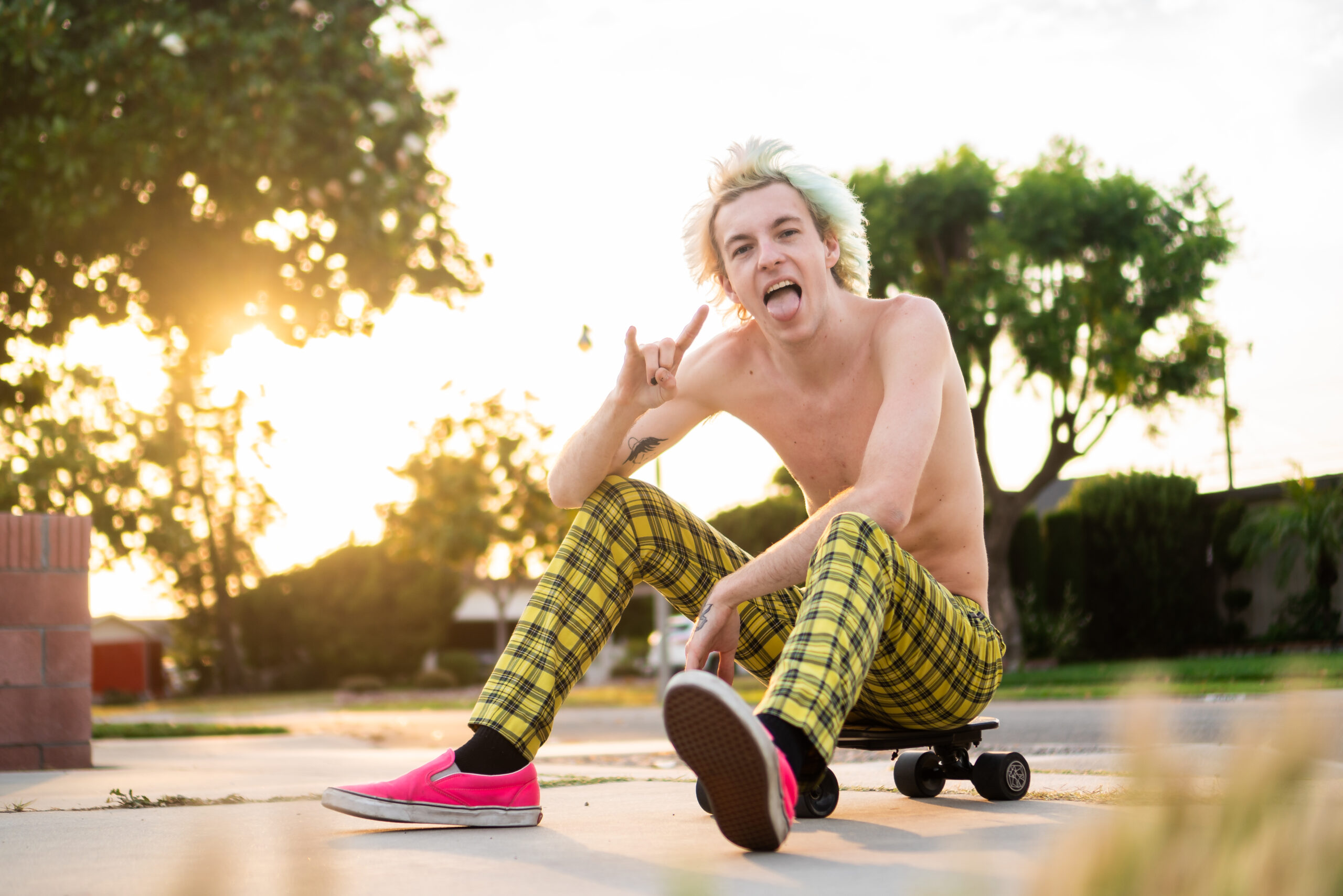 Probably the only time he sat down during our hangout!

It’s no wonder Tosh is one of the fastest rising drum players in the game today. Homeschooled, with a father who was a touring drummer, it made getting in a lot of drum practice so much easier.

The Lockdown Beat Down

The 2020 lockdown gave Tosh even more opportunity to grow and focus on his artistry. “I have to be more than just a drummer that’s hired to play on someone else’s song. I gotta be able to do this all on my own, if I have to.”

To that end, he’s hard at work, hustling to realize his ultimate goal: a solo album of his own that he can push while he’s out touring with MGK or Carlie or any of the numerous artists craving that trademarked Tosh Groove.

“I heard that ?uestlove finds a hundred new songs a day,” he then tells me. “That’s a bit much, but I’m trying to find, like, 10 a day.” Digging for new music—and music that might be outside his normal musical appetite—is what helps him keep up with his skills and fine-tune his chops.

So what can we expect from Tosh in the near future? “A lot,” Tosh says.

And we know that “a lot” is no overstatement.

How do you unwind when you need a moment recharge creatively? Play drums, really—especially when I’m on the road. If I’m on tour, I’ll FaceTime my family.

Who would you most want to hang out with? Liam Gallagher (Oasis). No, wait – and Kanye! Definitely. Absolutely. I feel like him and Liam would have the gnarliest conversations.

So what’s on your playlist right now? Ana Tijoux. Carlie Hanson. MGK. Josiah and his band Death Grips. Jemere Morgan. Youngblood. Bon Jovi and Oasis will always be on my playlist.

And the Final Question: Bleu Cheese or Ranch Oh, man! I love them both! But I probably gotta go with bleu cheese.

And One More Thing—That Taco Recipe!

No, we didn’t forget. Here’s the absolutely swag taco recipe to satisfy that taco craving. If you try it, tell us how much you love it. 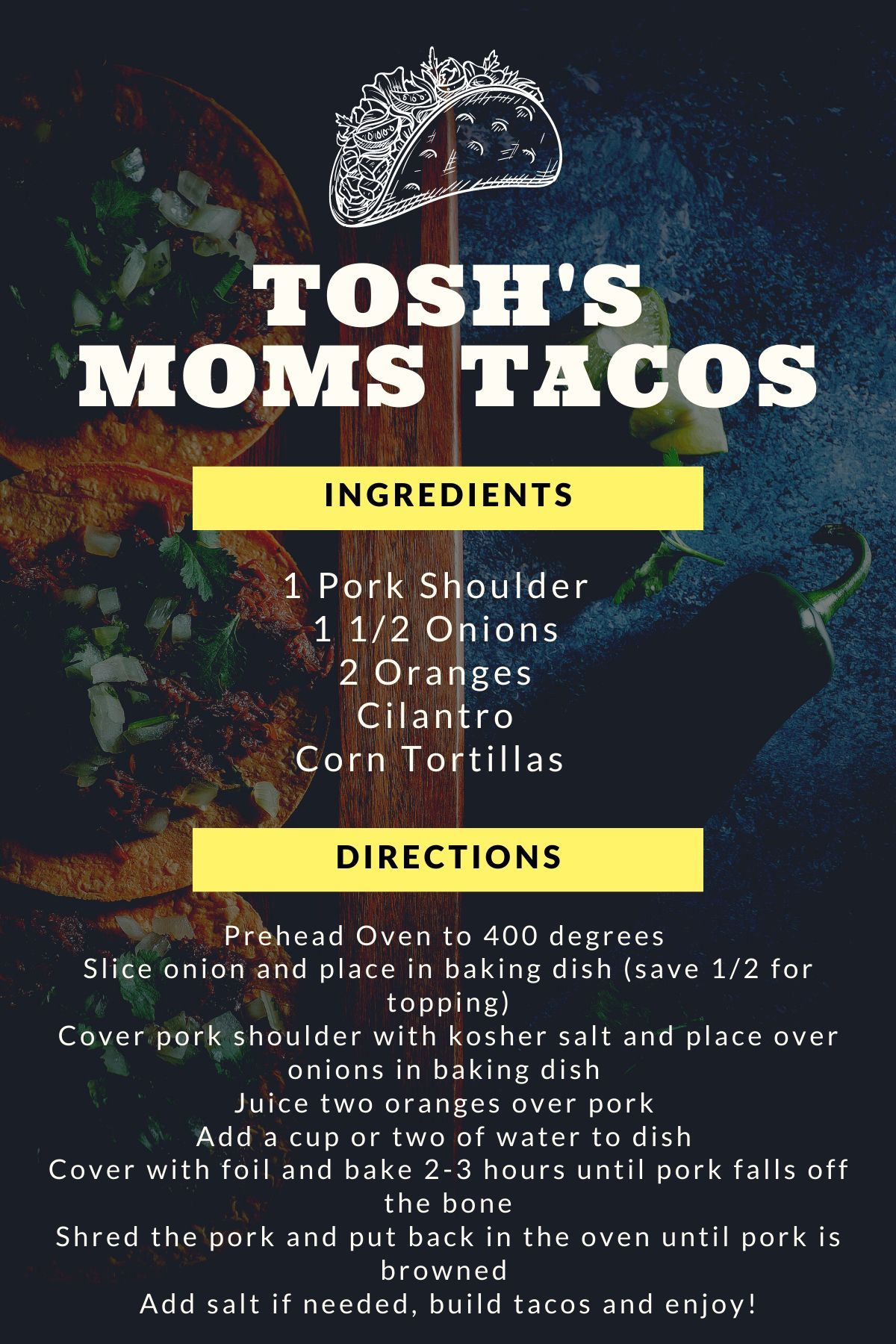