Have you ever had that one friend? You know the one. Always has the perfect thing to say. Shows up at just the right time with the exact tool you need. Always swoops in and saves the day. For a touring band, that friend is their guitar tech. For Pop Evil—a band we love here at SWAGTRON—that friend is Tom Reardon. Immensely knowledgeable. Quick on the draw. Cool under pressure. The man breathes swag. And when the tour chips are down, he’s the guy you want on your side.

“To be honest,” Tom tells me over the phone, “I don’t think many people even realize we exist.” Considering how many times a guitar tech can save the show—and how many shows Tom has personally saved—that’s a shame. After all, if a guitar tech has done their job right, you wouldn’t see them. They’d be practically invisible. Still, Tom’s in it for his own love of music and his need to keep learning, not for the accolades.

(We should all be so lucky to have a Tom Reardon in our lives!)

Tom Reardon with his SWAG 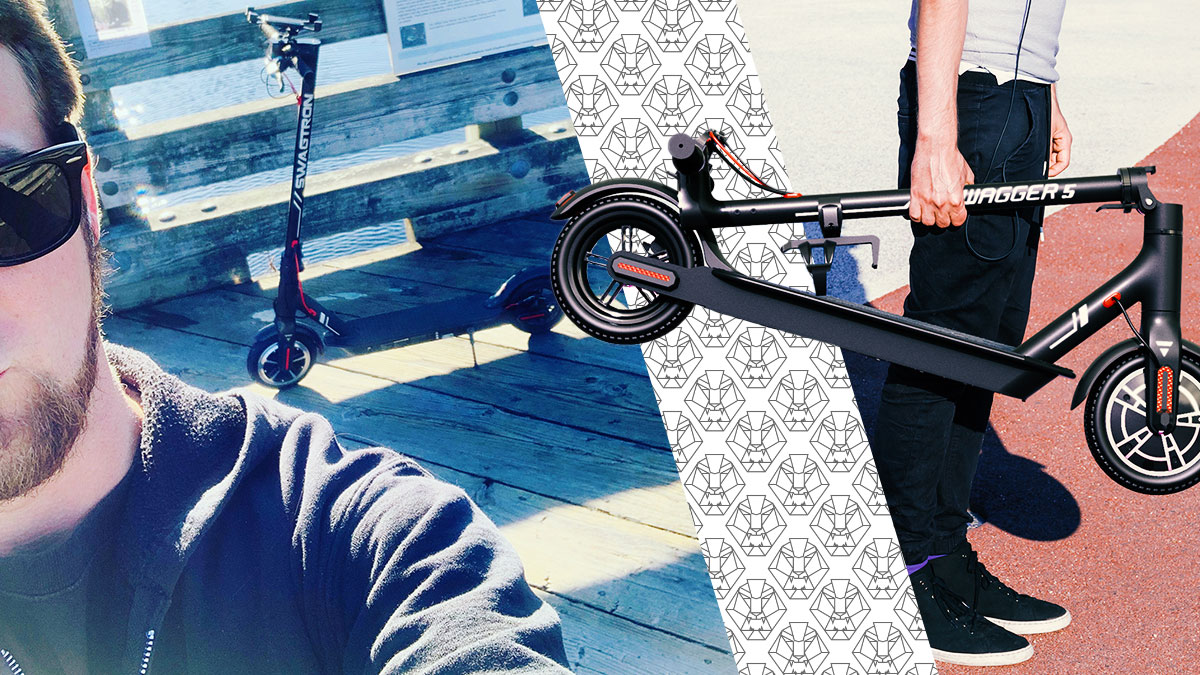 Tom Reardon with his Swagger 5 electric scooter(left), folded and ready to go— the Swagger 5!

The Start of a Wonderful Friendship

Tom started playing guitar at a young age. Though Tom played in several bands in those early days, becoming a rock-n-roll star wasn’t something he yearned for. A rarity, certainly. Even more rare, though was what actually tugged at his interests. “My Uncle owned a stage rigging company,” he tells me. “So he got to tour with some legendary bands.” But what intrigue Tom most was what his uncle did backstage—sometimes under-stage. And Tom got to experience a show behind-the-scenes firsthand in 1999.

“Woodstock ’99.” Yes, that Woodstock—the messy one, the infamous one. It had its problems, but the experience paved the way for Tom to become one of the most sought-after guitar techs in the biz. Tom remembers it fondly: “Seeing all of the techs, stagehands, riggers, drivers, runners, tour managers—everyone working together—changed my life. I spent the next decade and a half learning as much as possible.

(It also probably helped that this backstage-first was with a mega festival where anything that could go wrong, did go wrong. Tom handles the challenges of touring like a true boss—calm, cool and swag. And he probably owes a lot of that to Woodstock ’99.) 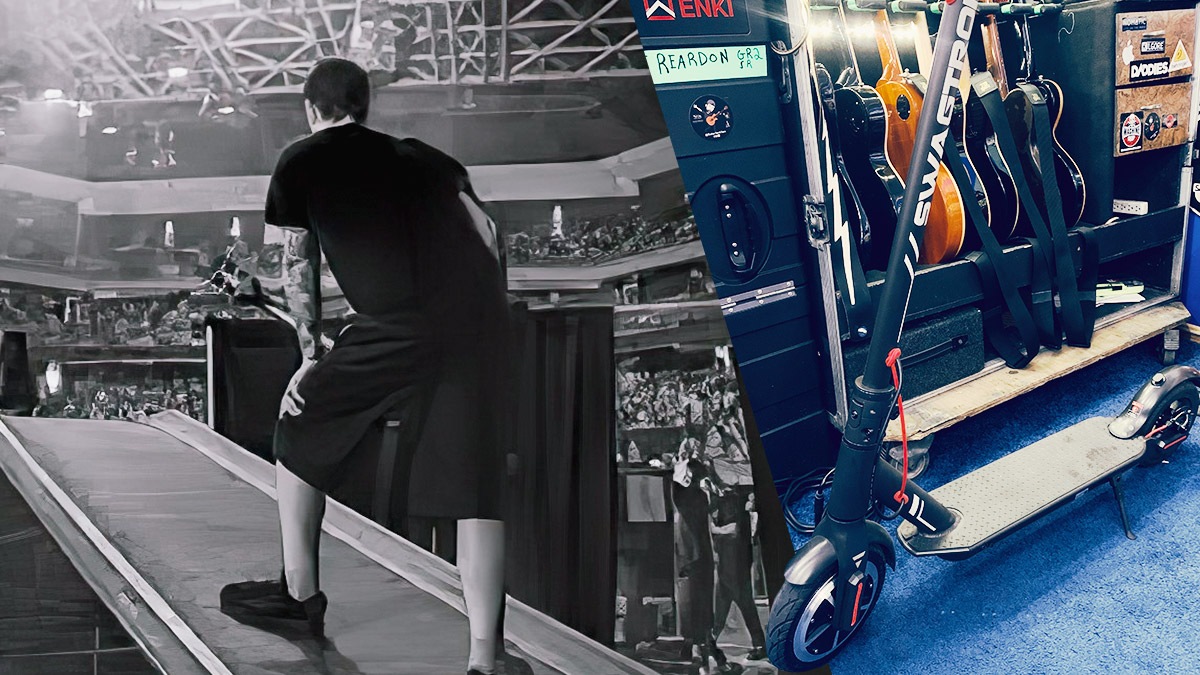 Tom Reardon ready to swoop in and save the day (left), Tom’s Swagger 5 eScooter backstage on tour (right).

Part of Tom’s swag comes from a combination of his solid guitar skills, his understanding of the craft, and his natural tinkerer’s heart. He’s been tinkering with and repairing stringed instruments for nearly twenty years now. So he knows his stuff!

Way before his stint with Pop Evil, Tom performed with his own bands and worked on guitars and other gear for local musicians. He put that on pause for a while to raise his son. A single dad, choosing his son over performing was a no-brainer. “I still got to play a bit,” he says. “Y’know, on the weekends. Just not, like, major touring. I needed to be home for my kid.”

But when you have a calling, eventually it comes a’calling. (That’s generally how it works.) A few years go by. A friend working for a touring band reaches out. The band needs a tech. The friend knows Tom’s background, knows that Tom is itching to hit the road. Numbers are called, connections are made. After a trial run that involved broken Schechter guitar string—handled with pure swag by Tom of course—and we have a match made in guitar-rock heaven. That band, of course, was Pop Evil.

Not the Most Glamorous Job

Most people don’t know guitar techs exist. And if they’re good at their job, you’ll likely never notice them. Guitar techs are meant to be invisible. But they are one big reason a show goes on without a hitch. Or if there is a problem, it’s handled quickly—hopefully before you notice it. That’s got to be a great feeling, when unforeseen mishaps threaten the show, but your skill and knowledge saves the day.

“It feels good,” Tom admits. And thank the guitar gods for that, because being a guitar tech isn’t the most “rock ‘n’ roll” job out there, despite what some might think. “Yeah, we’re touring, meeting tons of people. But, you know, I’m there to do a job.” And it’s a job that comes with a lot of tech savvy and know-how to pull off. Fortunately, Tom knows gear and loves learning new tech and how to incorporate into music and performances. 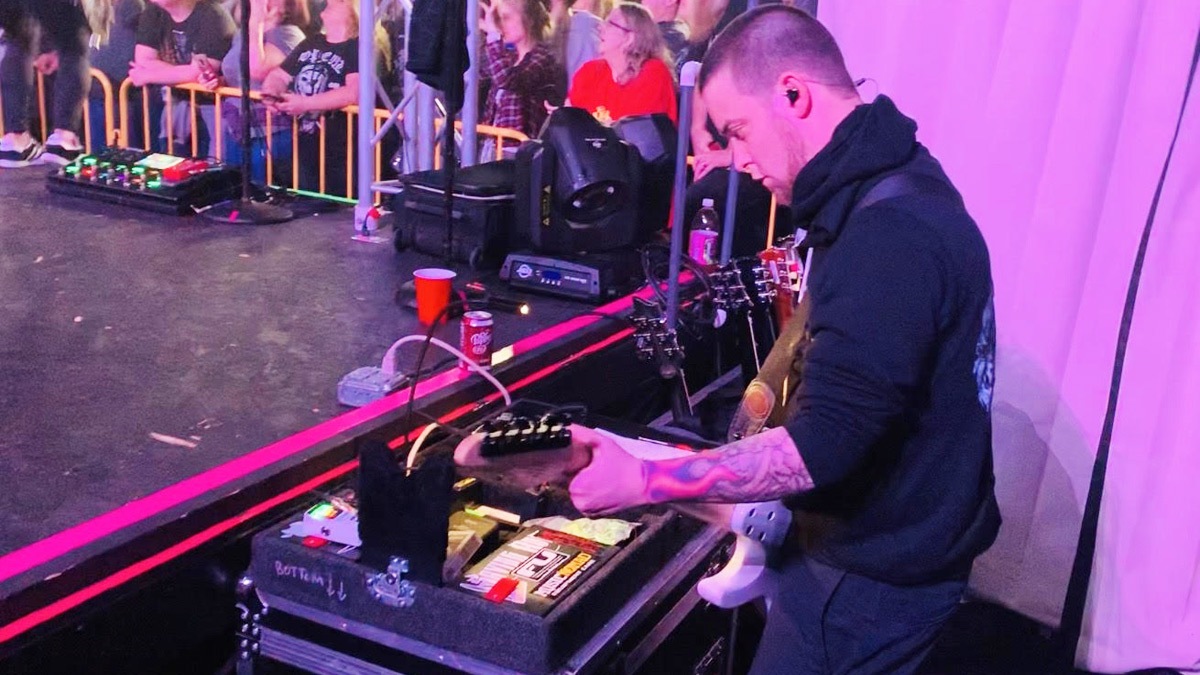 Tom can’t party all night and sleep all day. “During a tour, my day starts around 10 a.m. with the tour manager, planning things out for the day. And it’s nonstop until around 2 in the morning when the gear goes in the trailer and the locks go on.” Basically, a guitar tech is the first one and last one out.

Some of Tom’s favorite moments revolve around shows he worked on, like an arena tour with Disturbed and a show in Michigan with Shine Down. But one of Tom’s most memorable nights come from a swag encounter with some true rock legends. Tom starts the story with a big laugh, so you know it’s going to be something good!

“A band I was with was set to headline the Whisky a Go-Go [a legendary night club in West Hollywood, California] on the Sunset Strip back in 2018. We loaded up the gear. Then we were given strict orders not to let anyone in, like tourists from off the street. No one but the band and crew.”

Tom noticed a group of older guys opening the loading door. Tom tried to stop them from entering the club. But one of the guys says, “Oh, no it’s fine—these guys were the house back back in the day.” The two older guys shake Tom’s hand and introduces themselves. “Hi, my name’s Robert,” says one. “I’m John,” says the other. It takes a moment, but soon it hits him.

And that leads us to our next question: Did Tom let them in?

Like most others in the entertainment industry, Tom lost a year’s worth of work in 2020 with the lockdown. “I remember when it was just supposed to be two weeks or two months or something,” he says. But there’s no bitterness in his voice. Tom was fortunate enough to stay busy and keep his tech skills on-point doing what he does best: tinkering, repairing, upgrading local musician’s instruments.

But the road was always his happy place—his Zen. It was hard to go a full year not seeing the joy that a great concert with a great band playing great music can put on a person’s face. And he admits: “I missed the camaraderie, the people I worked. They had become a family to me.”

Now, the future is looking bright again. Tours are starting up again, shows are happening. And Tom has plenty of upcoming plans. From hitting the road with Pop Evil on a new tour, to rocking out with his own Chris Cornell cover band, Tom Reardon—our very own knight in swag armor—has plenty more memories to make.

Pop Evil’s on tour now! Be sure to check them out if they rock a city near you. And don’t forget to tell Tom “hi!” MUSIC IS SWAG!

Need Some Music? Check Out Pop Evil on Spotify