We’ve had the pleasure of working with a lot of talent—from actors and musicians (Rakeem Miles, Rossini) to athletes and gold medalists (goalkeeper Brittany Wilson, Olympic hopeful Tyrell Richard). Some of our swagTEAM we’ve met recently; others, we’ve worked with for several years. That’s the case with Las Vegas artist, DJ, producer and all-around SWAG human Pretty Done. He’s worked on box art for SWAGTRON® hoverboards and electric scooters and even created a coloring poster for our ongoing Pretty Swag contest! 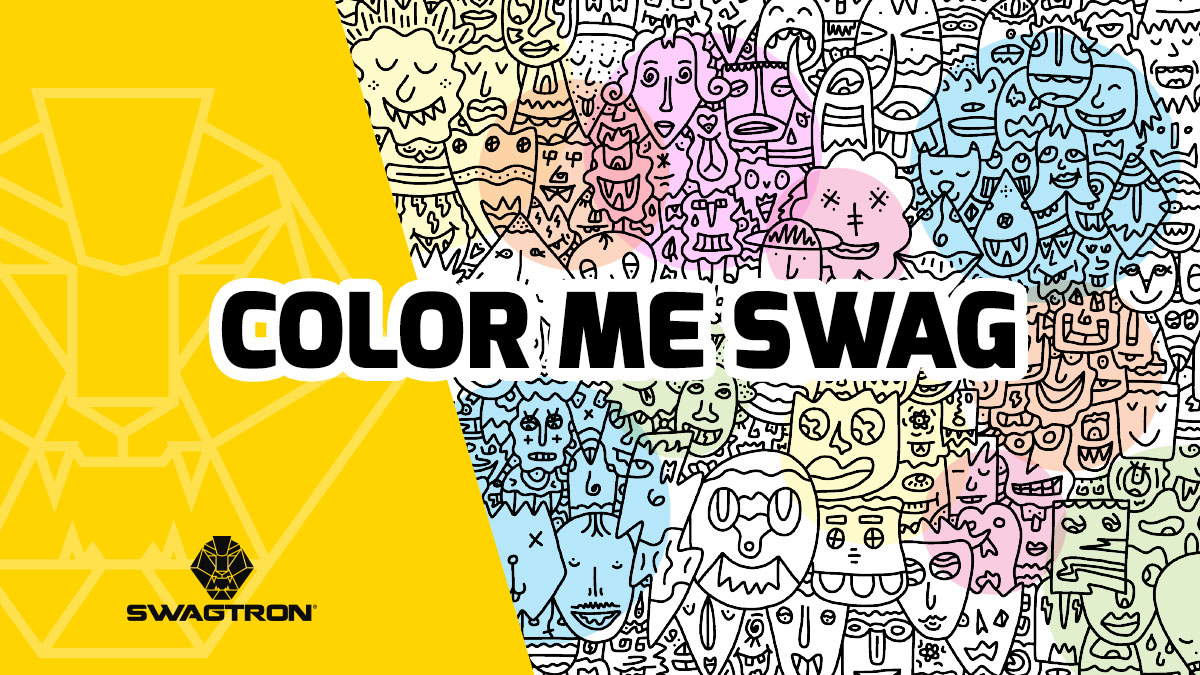 Color Me Swag! The coloring poster included with new orders. Color, share and you could win SWAG!

Originally, opportunity brought Pretty Done (real name: Adam Rellah) to Vegas from Ohio. Continued inspiration to create kept him here. “If I wasn’t DJing or producing [music,” Adam once said, “then I was drawing. If I wasn’t drawing, then I was taking photographs.” That dedication to creation has paid off. You can’t drive around Vegas without seeing one of his murals. His style, a modern mix of freestyle line-art reminiscent of Keith Haring, constantly graces the walls of some of the Valley’s hippest spots. 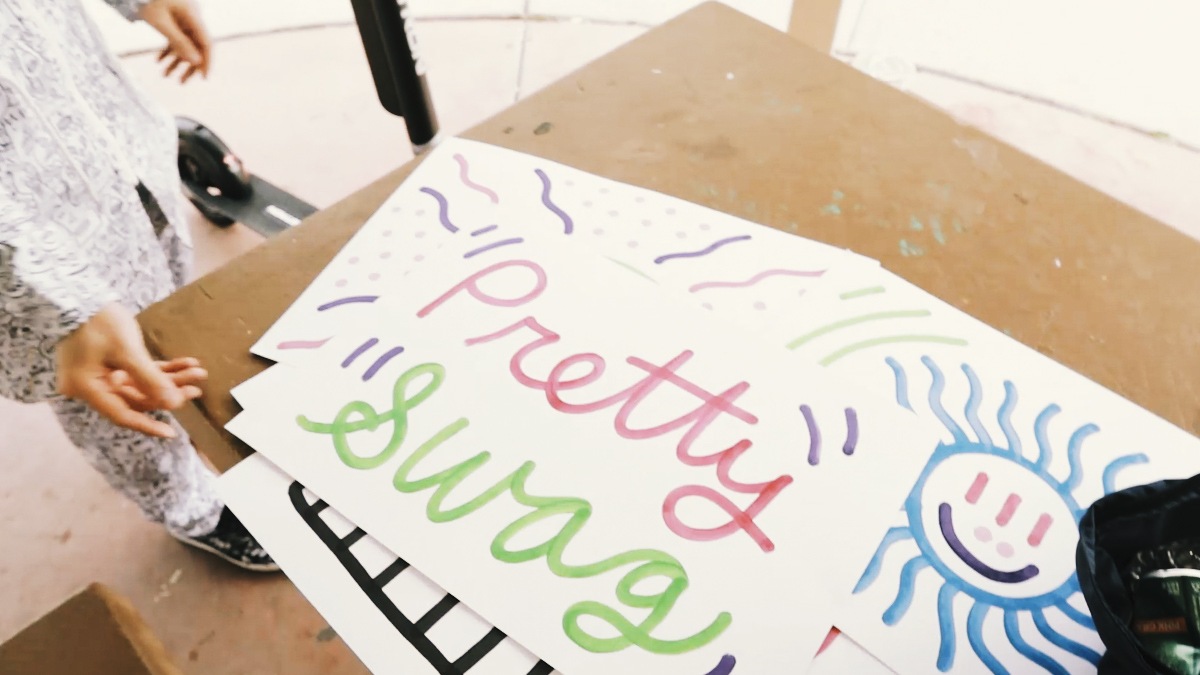 “I’ve always drawn characters, fonts, shapes, and patterns,” Adam tells me. “Constantly doing it for hours until it became its own world—its own language.” Adam tells me. And it showed in the box art that he did for several SWAGTRON products.

And it helps if he likes the product!

“It’s a solid electric scooter,” Adam says. “I love it. And it’s great for micro-trips to the store or deli—when it’s open. Or just when I wanna go out and enjoy the day.”

As expected with an artist of his caliber, Adam is a man of few words. “I have a video, though,” he says, smiling wide.

It’s pretty obvious that Adam really enjoys his Swagger 7T. Probably the only thing that would make it better in his eyes would be some cool drawings and— 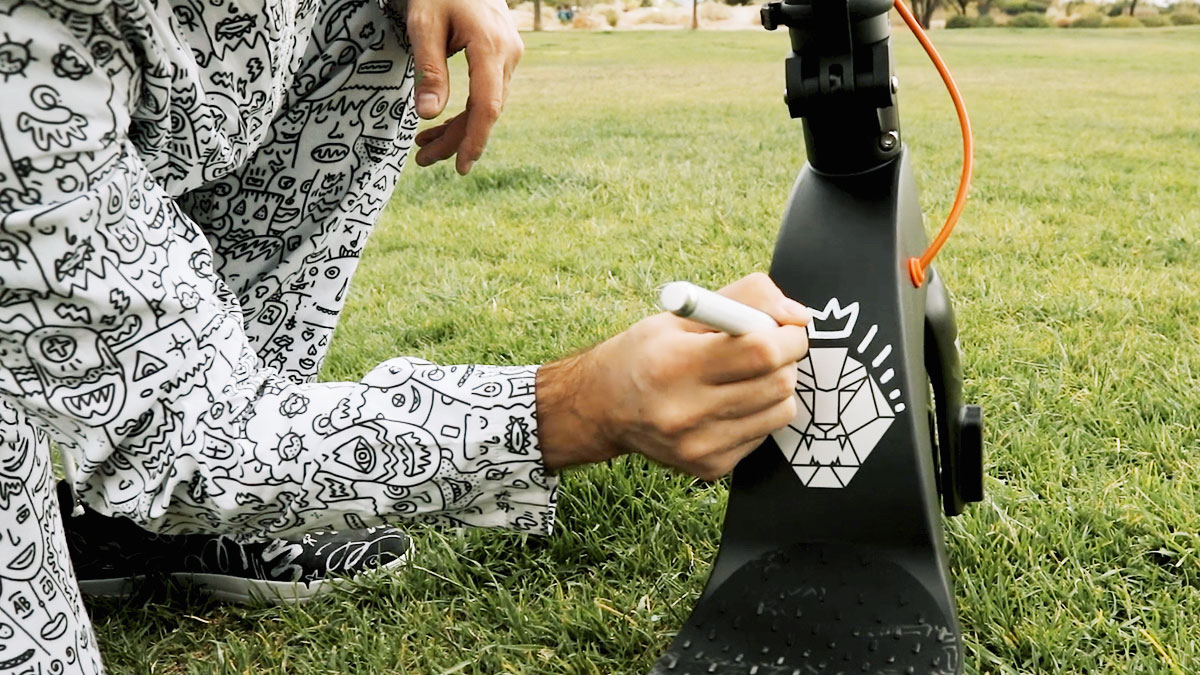 Oh, I see Pretty Done’s taken care of that for us. 😉

Pretty Done has slowly grown in prominence over the past decade. But it took a global pandemic to shift his focus to his art, helping him fine-tune his craft and his vision. “Every day it’s just growing and growing. It’s still a long way to go. There’s a whole world out there that doesn’t know about Pretty Done.” 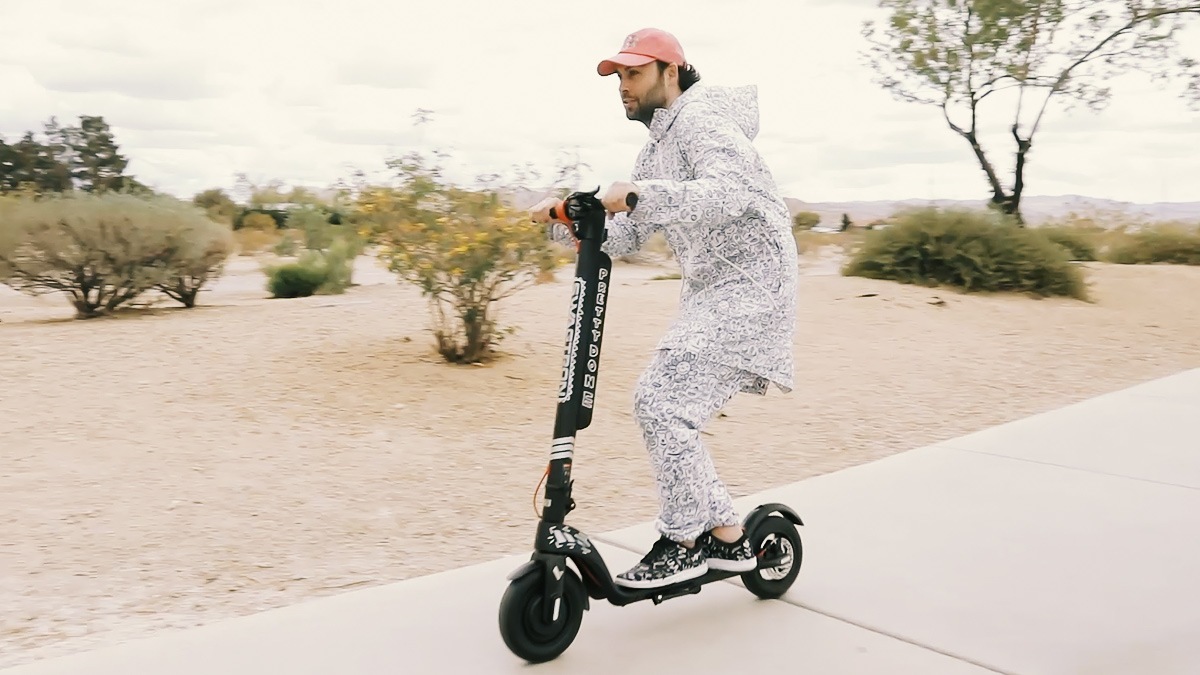 And his artistic mission is nothing short of world domination. Adam once said in an interview: “I want to paint the world, have art in different countries. I want to paint a plane. I want to do an air balloon—big scale.” There’s a whole list of things he feels compelled to do. And he’s definitely on his way, with murals and interactive art experiences popping up all over Vegas and beyond. His work has even caught the eye of the fashion world, with Adam partnering with Fashion Show Las Vegas to drop an interactive, exploratory, Insta-ready experience this past spring that was the definition of SWAG!

He called it, “Summertime Happiness,” and Adam wanted to capture the joy of Vegas in the summer. Part of that experience wasn’t just a simple unveiling—Pretty Done’s modus operandi goes well beyond that!—rather, the public was encouraged to witness the creation of “Summertime Happiness.” And seeing a creator create firsthand is, itself, a thing of joy.

Adam works best on a blank canvas. It suits his improvisational nature—which likely came from his DJ background and “reading the crowd” and “controlling the vibe.” It’s the unpredictable nature that fuels his art. “It’s like a roller coaster,” he says.

And he’s following in the grand tradition of some of the masters that came before him, classical composers that felt compelled to create. And, if that creation wasn’t music, it was painting, or some other medium—just so they could get an idea they had or emotion they felt out in the world. Felix Mendelssohn, Gershwin, and even Mozart took to painting when the creative urge called for it. So it makes sense that Adam would gravitate to multiple genres and mediums to release his creativity. 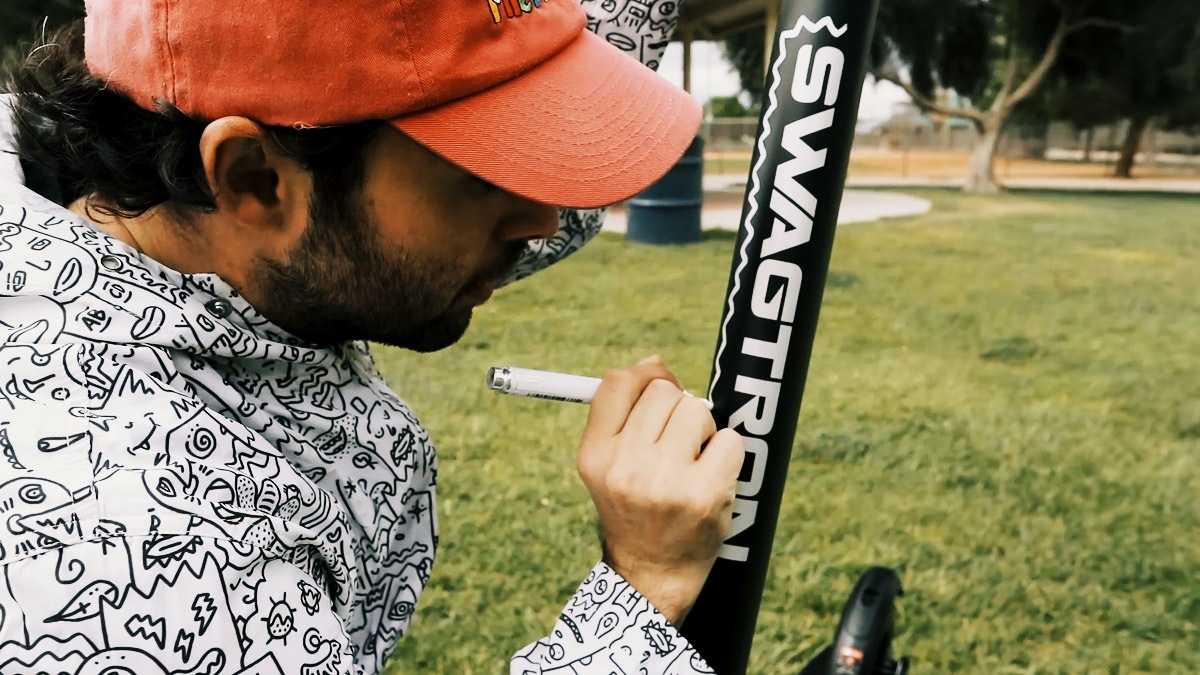 Are we calling Adam Rellah—Pretty Done—a genius? On-par with the Chopins and Mozarts of the modern world?

Well, we’re not not saying it.

Pretty Done is a force to reckon with. And we’re happy to have him as part of the swagTEAM.

Get Social with Pretty Done