Lots of things in life require balance. Work-life commitments. Bicycling. Checkbooks. And yes, riding a hoverboard. Lamonte Goode, a.k.a. Cyberyoga, knows a thing or three about balance. He uses SWAGTRON swagBOARD in his yoga practice and performances, showing off the amazing synergy that can be obtained between man and machine. And he does it with the skill, grace and quiet panache of someone who was born to do exactly that!

Originally from Akron, Ohio, Lamonte now calls Los Angeles his home. He’s appeared in films, commercials, TV shows, as well as music videos for artists, like Rihanna, Shakira, Eminem, Snoop Dogg and Wyclef Jean. He started off as a breakdancer, using yoga to help with his flexibility and inspire new and unique dance moves and poses. But there was another benefit: “I frequently got injured in my street dance practice, so yoga was the best addition to my training.” The added flexibility training helped mitigate those occupational injuries.

We’ve worked with Cyberyoga as far back as 2015, and he never ceases to amaze us!

On Art, Creativity and Inspiration

Lamonte’s creativity is deeply inspired by art, architecture and the fluidity of the human body. And that translates into a style of yoga that’s equal parts breakdance, acrobatics, geometry and, of course, yoga. This fusion came to him nearly twenty years ago. Still, he needed technology to catch up to his ideas. But once it did, Cyberyoga was able to truly start his yoga revolution, with social media helping pave the way.

“Cyber is actually an acronym,” Lamonte once said in an interview. Calisthenics, Yoga, Breakdance, Evolution, Revolution, with yoga as the base that binds it all together. “Cyberyoga is a new-age, futuristic spiritual practice for the modern age.” 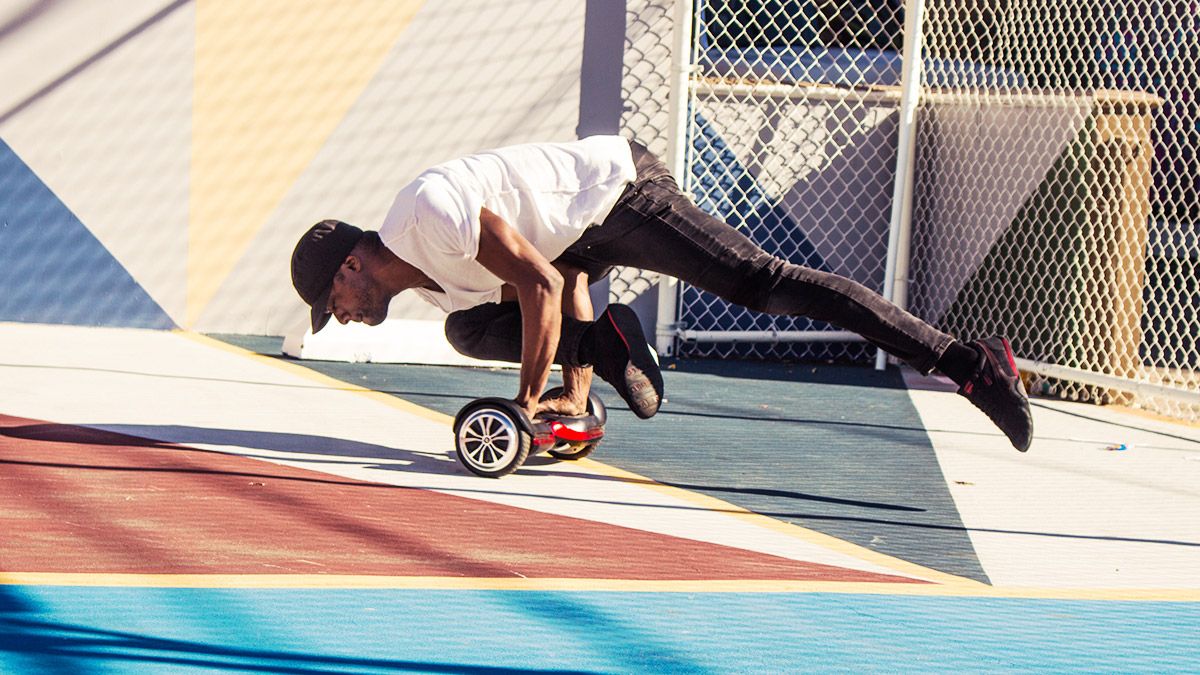 At an early age, Lamonte was inspired by Michael Jackson and martial art movies, especially those of Bruce Lee. Lee was, himself, a vocal proponent of calisthenics for health and fitness growth, so this connection is understandable. “If I could meet one of my inspirations, I would spend the day with Bruce Lee and absorb his knowledge.”

On Working with SWAGTRON Hoverboards

Cyberyoga worked on a photoshoot for the swagBOARD T580 Vibe hoverboard in 2018. The T580 Vibe is one of our top sellers, even today, and he left us amazed with his ability to combine acrobatics, yoga and gravity-defying balance with a hoverboard. He not only created cool shapes, but he maintained them and made it look easy. He once said: “My art is inspired by Breakdance, Sacred Geometry, and Yoga. I create movement shapes and geometry with my body, creating encoded messages for those that can see it.” 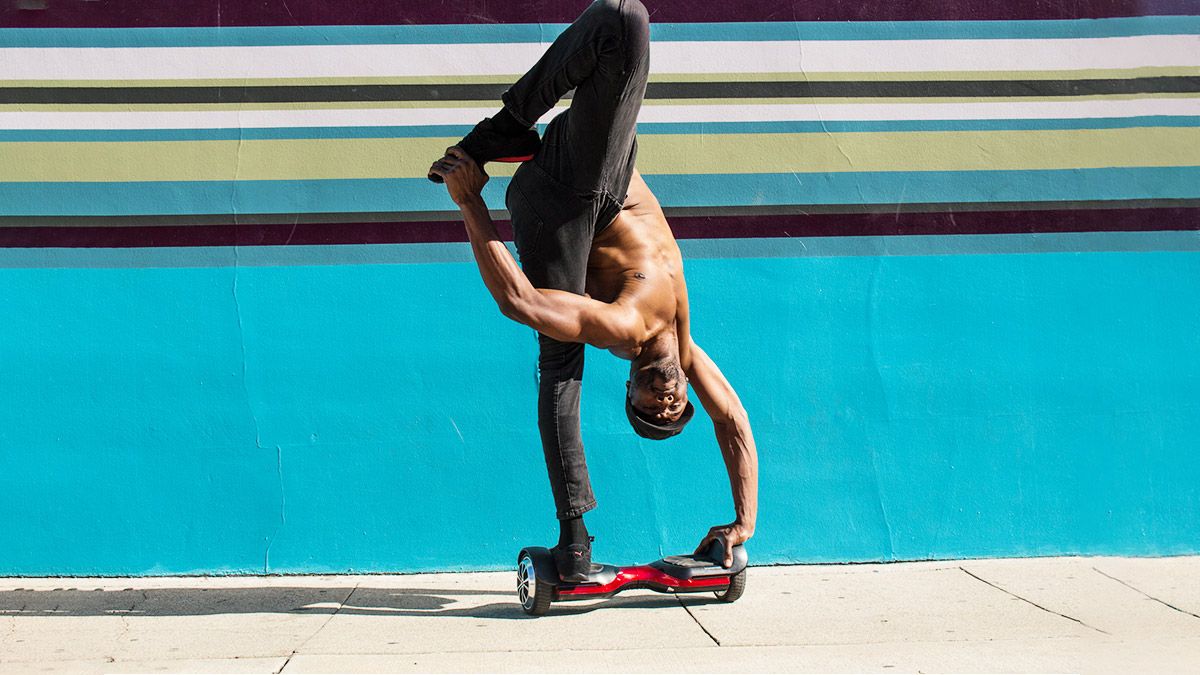 Cyberyoga showing off his supreme balance, control and flexibility on the swagBOARD T580 Vibe.

We imagine working with something that moves adds another layer of complexity for every aspect of choreography, from its creation and practice to the final performance. (And Lamonte can confirm this.) But the T580 Vibe delivered on what he needed the most: exceptional balance, precise control and the durability to handle up to 220 pounds with ease. With the ability to crank up the responsiveness by turning on Learning Mode, even beginning hoverboarders can start cruising around like they were born to it!

And the T580 Vibe goes far beyond the basics. It’s loaded with features that helped push it to the top of Must-Have lists and Buyers’ Guides ever since it first went on sale. Connect to the SWAGTRON app and blast your latest playlist on dynamic Bluetooth speakers. Other features include bright LED headlights, on-board battery and system indicators and non-slip foot pads. Like all SWAGTRON Swagboards, the Vibe T580 has passed rigorous safety tests for UL2272 certification because Safety Is Swag! Beyond that certification, our patented SentryShield® and Smart Battery Management technology offer additional multi-layered protections against over-voltage and extreme spikes in battery temperature.

Lamonte continues to work with SWAGTRON hoverboards in his public performances and yoga training. He’s even made a “How-to Ride” tutorial for hoverboards on his YouTube channel, featuring a swagBOARD Twist Remix:

“I can’t wait for the day hoverboards can hover off the ground in real life!”

We’re with you on that one!

On Staying Positive and Focused on the Future

Cyberyoga’s unique style of yoga isn’t always met with open arms. He’s had to deal with some in the yoga community who aren’t very keen on what he’s doing. After all, some people are reluctant to change and to accept change in something they love. “I received a lot of criticism in the yoga world because of my innovation on top of the traditional yoga practice,” Lamonte tells me. Adding technology, blending breakdance—it was all too much, too fast for a lot of yoga purists. But that’s not all. “Strangely enough, the fact that I am African American.” 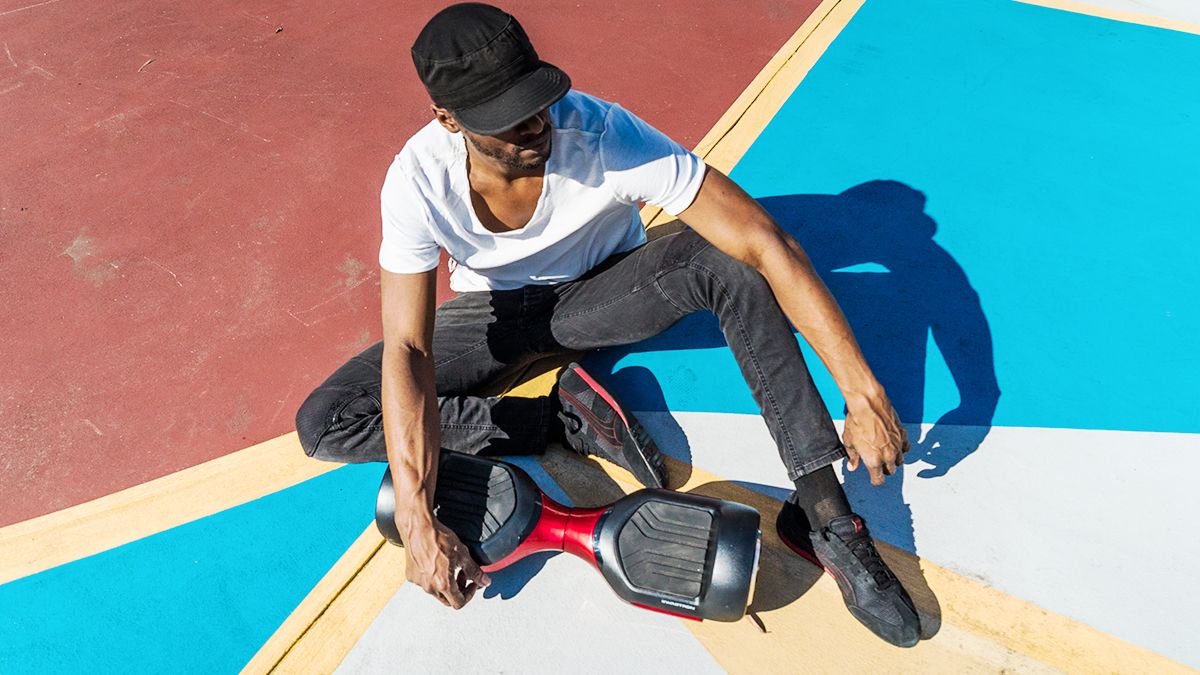 And to come from a community that Lamonte took solace in, it was especially disheartening. “I was shocked actually but I never let that slow me down. It only gave me more fuel to push harder!” And push harder, he did! He took refuge in the close friendships he developed, in his yoga practice and studies, and in his own dance creations. These same three things helped him deal with the loneliness and isolation of 2020 with COVID-19.

“One of my favorite moments in my career was performing by myself on stage and receiving a standing ovation for my Cyberyoga Solo act.” And those accolades continue to come.

So what’s next for Cyberyoga?

Lamonte continues train vigorously, compete and perform. He teaches and holds workshops and clinics in Los Angeles and all over the world, both in-person and virtually. He and his partner created a book, Neosutras: Yoga for Love & Intimacy, yoga-inspired book for couples who wish to connect deeply through daily yoga practice of reconnection. And another book is on the way.

Lamonte believes that you can do anything you set your mind to. And his mind is set on making his Cyberyoga brand a household name in the fitness industry—and beyond.

And we have no doubt that he’ll breathe this into reality.