It’s hard to think in terms of “I can’t do it” when Jonah Vandever is in the room with you. A double amputee at just 18 months of age, Jonah wasn’t given the best prognosis for life by his doctors. “The doctors told my mom that I had probably six months to live.” But Jonah defied the odds and has continued to do so for 23 years. In fact, Jonah has been more than “just surviving”—he’s been thriving!

No Legs? So What!

“My Motto is: I don’t have legs, so what?” says Jonah when talking to us about the activities he loves the most. “Anything you can think of, I’ve been able to do it. I bike, hike, ski, snowboard, run, jump . . .” And believe us, the list goes on. But most of all, he loves to skateboard. After hearing that, we just had to send him an NG2 Electric Longboard with hands-free controls and built-in A.I. And it’s been a match made in heaven! “I absolutely love the NG2 board!” Jonah says. “It’s fun and easy to use, even with my hands. If I could make the perfect skateboard, it’d basically be the NG2 but with a seat to keep me positioned once I go to max speed. Another idea with the longboard’s remote? Built-in speedometer. That’d be an easy way to know the speed I’m going.” Interesting ideas, all around. 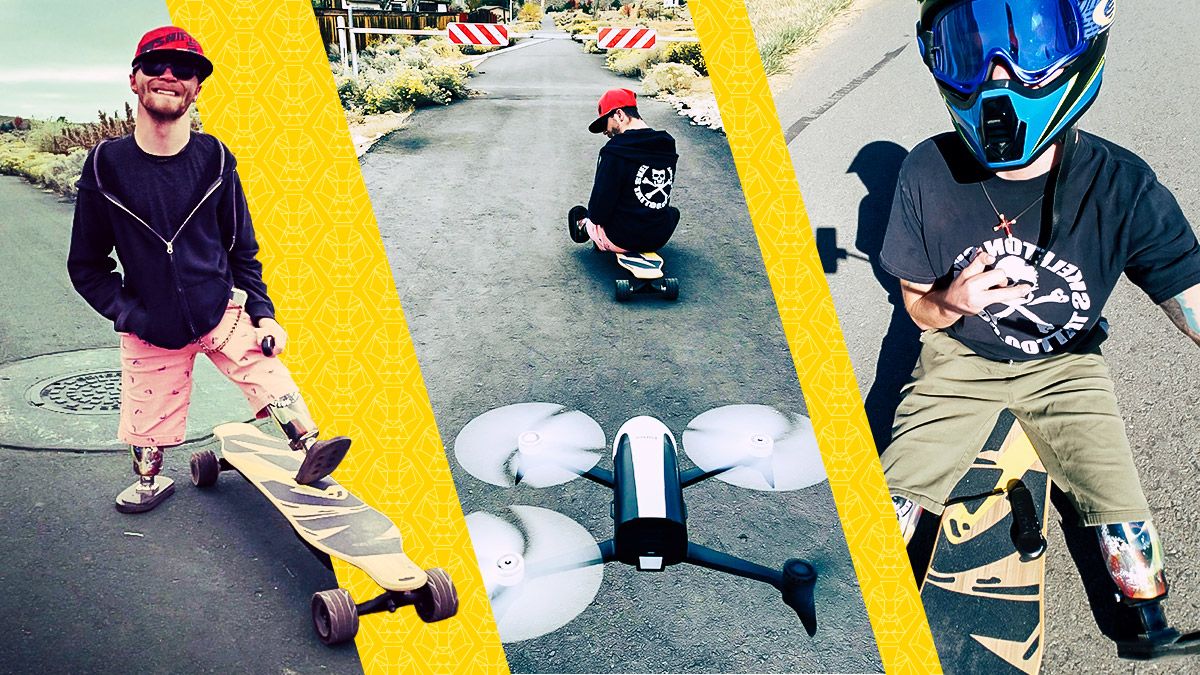 Jonah is currently involved with the Challenged Athletes Foundation (CAF), an organization that helps people overcome physical challenges so that people with them can lead active lifestyles and compete in athletic events. “That’s been dear to my heart from day 1! Being able see them trying new experiences in life they thought they’d never have the chance doing—running, hiking, climbing, skiing, snowboarding, swimming, biking, whatever it may be! Seeing that fills me with such happiness.” Even from a young age, Jonah was all about spreading that positive, can-do attitude to others. “Working with the Wounded Warrior Project and making the Vets smile is one of my favorite memories from my childhood.” For Jonah, it’s important that he reminds others that having a disability is no reason to give up on life. Instead, as he puts it, it’s about finding a way to turn your DISABILITY into an ABILITY. His mom, Steffini, recalls: “The doctors said he would never walk. But even after his legs were amputated, even with the stitches still in the bottoms of his stumps, he just ran across the living room floor.” And Jonah’s been running ever since. Another great organization for Jonah has been Stride Adaptive Sports. “Flying out to Massachusetts and skiing with other amputees and others with different types of deformities,” Jonah recalls. “Being able to enjoy the slopes with them, seeing their drive and determination to shred some snow. Watching others who have gone through worse than I have and seeing them live life to the fullest. That gave me the understanding that moto: I don’t have legs, so what? So . . . what’s stopping you?” From the very jump, Jonah has found inspiration in others around him, using it as fuel to experience life. And it started close to home with his sister. His skateboarding life started at the age of 4, when he grabbed his sister’s board from the garage. “I wanted to be just like her,” he says. “She was a skater at the time.” Jonah knew he’d have some challenges with balance—especially then—until he decided to sit on the board and use his hands. “After I figured that out, skateboarding became my life!” And what a life it’s been! It’s that “see-a-challenge/overcome-a-challenge” experimental attitude that’s helped Jonah go from skateboarding to skiing, then to snowboarding. The sky’s the limit! 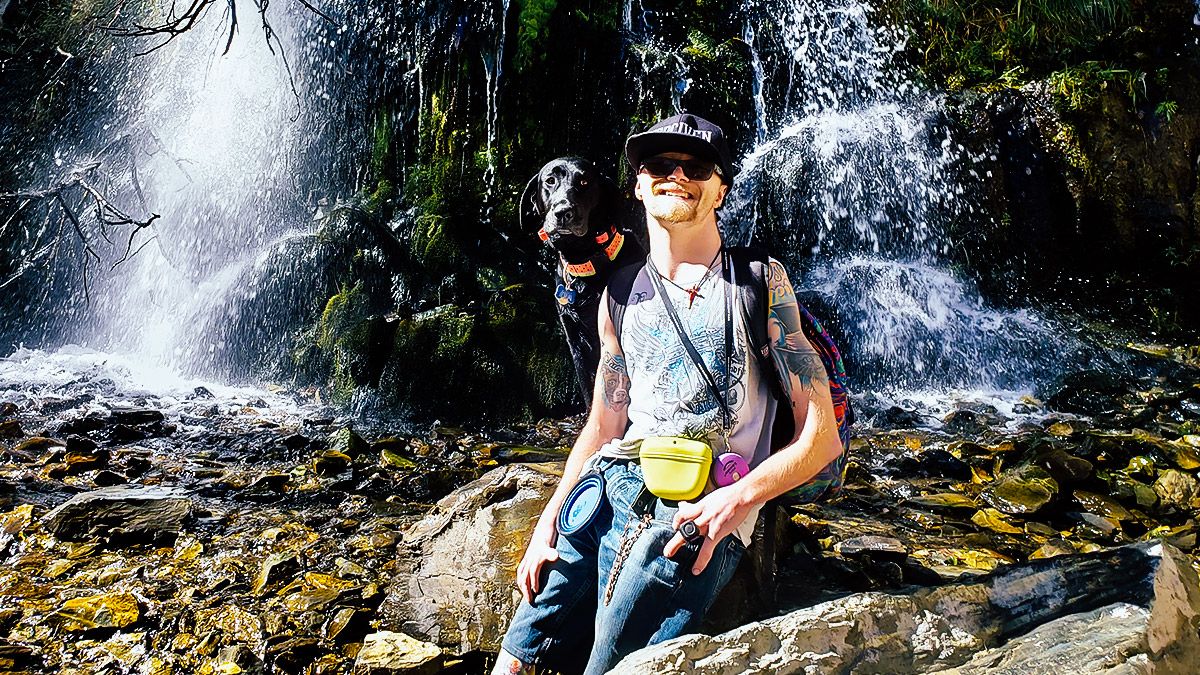 ON THE ADAPTIVE ATHLETE COMMUNITY

“My biggest encouragement back then was my adopted big brother Rudy Garcia Tolson. At the time, I only knew him from seeing him on T.V. I would always hear about him skateboarding by sitting down, going to skate parks and doing tricks. I finally met him in-person 3 years later. That’s when I was introduced to CAF (Challenged Athletes Foundation) too.” Rudy inspired Jonah to do something that, at the time, Jonah had no idea he could even do—skateboarding. “It was the start of one of my biggest hobbies I have now!” The Adaptive Sports community has always been a great source of inspiration for Jonah. “Watching Adaptive sports is my favorite,” Jonah says. “Seeing the participants show endurance and strength, of not letting their struggles in life phase them! Seeing them push forward, proving to the world that you can do ANYTHING you set your mind too!” Then he adds with his characteristic wry smile: “I’m also a Cowboys fan, so there’s that!” Dedication, indeed! And it’s nice to know that another past time of skaters and thrashers is familiar to Jonah—injuries. “I have a mini board that I love being able to take out on ramps, especially after last year when I injured my wrist. It’s made it very difficult to skate using my hands these days.” But Jonah is used to overcoming such challenges.

ON THE BRIGHT FUTURE OF JONAH VANDEVER

One final bit of advice from Jonah: “Find ways to interact with people so you don’t become so introverted and afraid to live and love your life. Push past the imitations you think you have! You’re way more capable than you think you are! It’s all in the mind! Get out there. Do what you love. Don’t settle for less because of fear. Step out of your comfort zone (of course, be safe!) and have fun while doing it!” So what’s next for Jonah Vandever? “Well, I’m in the process of planning out a drone choreography. It will involve some boarding! Just need to figure out the numbers of how it’s going to work! Also with the snow starting to roll in [Reno], I’ll be getting ready to shred some snow with a SNOSK8! First time on one and hoping it works out!” If anyone can make it work, Jonah, it’s you! Follow Jonah Vandever on social: Twitter: @NoLeggedJonah Instagram: @that_no_legged_dude_jonah