swagTEAM UPDATE: Grant Holloway has brought home the silver medal in the Men’s 110-Meter Hurdles event at the Tokyo Olympics!

Finishing his run in 13.09 seconds, Grant (already the world-record holder in the indoor 60 m hurdles) proved once again that his SWAG is truly epic! Some people talk the talk. Others, walk the walk. (Or in Grant’s case, run.)

We first worked with Grant in our inaugural 2019 GIVING IS SWAG campaign for Toys for Tots. At the time, he was knee-deep in training for a certain big sporting event that (usually) happens every four years. And we felt honored that he’d take time out of his rigid training schedule to help bring smiles to children who could really use a reason to smile. (Now, that’s swag!)

We caught up with him again (or tried to—he’s fast!) back in December, while he’s training in Florida. We were pleased to see that he was still just as nice, genuine and down to earth then as he was when we first connected.

(Two months later, he broke the world record for the 60m hurdles at the World Athletics Indoor Tour in Madrid, Spain, finishing in 7.29 seconds. He currently holds the nine fastest times in the world for 2021 as of this update.)

With all these achievements and accolades, Grant is well on the way to being considered one of the sports Greats, in the same vein as Kobe Bryant, Michael Jordan, Tiger Woods or Jerry Rice. It would be easy to let that get to your head. But for Holloway, today is just a new day. “Records are meant to be broken,” Grant reminds us. “So anything I set or did in 2019, I’m expecting somebody—sooner rather than later—to come along and do what I did, only better. So whatever I did in 2018 or 2019 doesn’t define me.”

Even though what he did in 2019 was pretty swag! At the 2019 IAAF World Athletics Championship, Grant completed the 110m hurdle in 13.1 seconds. That first-place performance equals about 19.01MPH on average. Beyond impressive! (And actually slightly faster than to top speeds of some of our more powerful eBikes—for now.)

Grant then tells us a story he heard about Kobe Bryant—a basketball legend he would have loved to have met. After winning the NBA World Championship with his team for the first time, Bryant woke up the next day at 5 a.m., ready to practice. It’s an oft-told Kobe story and one that stuck with Grant ever since he first heard it.

“Kobe’s mental game was half the battle in everything [Kobe] did. No matter what was going on in his personal life, he knew that for 3 hours per day [during practice] he would give the best effort on the basketball court.”

And Holloway makes sure to lead that disciplined life as he looks towards the future and the Summer Olympics. “You can have that shot of bourbon,” he says with his characteristic smile, “but you’re gonna pay for it in the morning!”

ON MAKING THE PERFECT EBIKE (FOR HIM) & HAVING FUN 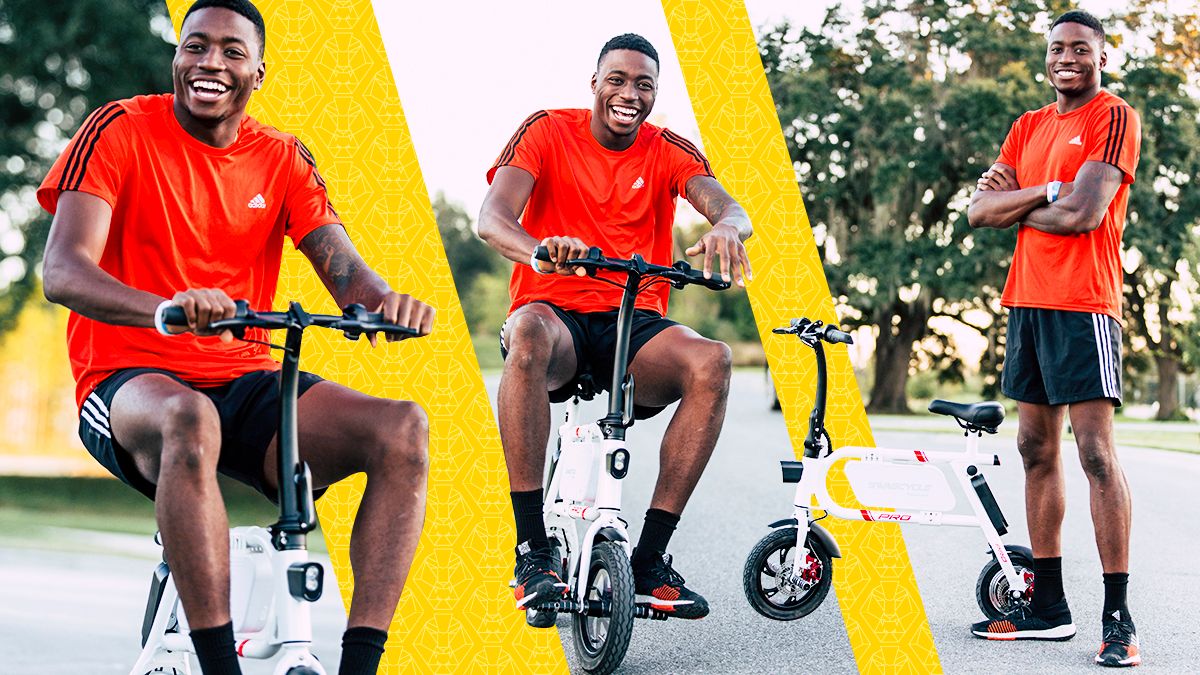 Grant on the swagCYCLE Pro he signed for GIVING IS SWAG!

After working with us for GIVING IS SWAG, we gave Grant an EB7 electric bike. “I love it,” Grant tells us, as he talks to us about riding it to and from practice. “Being able to just fold it and put it in the trunk of my car when I need to go is perfect.”

Even with all the training, Holloway still finds time to relax in all the usual things that guys his age use to relax. He plays a lot of video games, including Call of Duty. “Not a lot of people know, but I played Black OPs Call of Duty 4 competitively.”

And he loves to golf with his friends whenever he can. This invariably leads us into conversations about COVID-19 and how it’s affected his professional and personal career. Grant found it hard to focus on training once the situation started to get bad and the Olympic board postponed Tokyo 2020, at the time, indefinitely. “When you have a goal to aim for, training’s easier. But Tokyo is back on track, so now I have a major goal to zero-in on. And I picked up Pilates and yoga to help take my mind off everything and reset.”

MUST-READ: Are Hoverboards Worth It?

But these kinds of challenges—the ones that make you change how you think about solving problems—is something Grant looks forward to everyday. “I’m still figuring out my [running] style,” he tells us. (And we didn’t even know there were such things as running style, so this is pleasant news to us!)

ON THE NFL & FINDING YOUR INSPIRATION

And Holloway finds a lot of inspiration in his other favorite sport—American football. This makes sense. After all, he was a talented enough wide receiver to earn an offer from the University of Georgia. But even know, he still enjoys watching his first sport: “I feel like my generation [of NFL players] are the players people are watching and looking up to. People like Patrick Mahomes and LaMar Jackson, they’re all within 4 or 5 years of me.”

But plenty of young folks and future track and field stars are looking up to Grant Holloway, too. To them, Grant has this final word of advice: “Put your mind to it and stick to it. Be a bit selfish about it. Tell yourself, “I’m going to work hard for me, nobody else.” You can have other inspirations out there but be your own source of motivation. Tell yourself that you are going to be the reason why you make it to the WNBA; you are the reason why you become the next Tiger Woods. Work hard for tomorrow and even harder for the next day.”

And that’s how you make a world champion.

Thanks for the wonderful conversation, Grant!

See you in Tokyo!