We’ve all been there, right? That commute that becomes a backdrop of white noise. You set your alarm the night before, resigned, and consider the extra factors you might encounter – jam-packed buses and trains, and the inevitable roadblock.

The routine is tedious.

Whether you’re a part-time student or a full-time working adult, “the commute” is an old dilemma we choose to endure – especially as urban populations continue to rise and parking spaces quickly become rare and coveted commodities.

And things aren’t going to get any easier or spacious if we don’t make a conscious change.

Let me start by sharing my own commuting-transformation story.

I started out my freshman year of college doing a lot of walking. It was a great way to keep off the dreaded “Freshman 15” but it was pretty dang time consuming and meant I was showing up to class just in the nick of time. It didn’t impress my professors too much.

So, I took stock and scoured through my parents’ garage for a solution to this problem. I returned to campus after Thanksgiving armed with an old kick scooter I got for my 10th birthday that I barely rode. It started off great – I cut my campus commute in half, and was even able to drive a lot less. I started taking my scooter to the store to pick up small things, or even caught a movie or two near school.

But after the honeymoon stage passed, the rose-tinted glasses came off and I started to see the drawbacks to my initially wonderful plan. Using an average push or kick scooter was great to start out with, especially going downhill. But once those hills leveled out – or worse, inclined into rotten UPHILLS – it became a lot of strenuous work. I would arrive at classes winded or even show up to my shifts at the cafe on campus sweaty and disheveled. It became so bad, I would often choose to hoof it to work instead of taking my once-beloved scooter.

My friends recommended I make the switch to a bike, but I was faced with the same set of problems. So, it was back to the drawing board.

That’s when I saw it – the solution to all my campus commuting problems. She rode across the quad on it, and at first I thought it was an ordinary but especially smart-looking scooter…only she wasn’t pushing. The scooter was gliding all by itself.

It was like a lightbulb going off over my head in one of those old cartoons: an electric scooter.

So I ran back to my shoebox-sized apartment (relishing the idea that I wouldn’t have to run across campus anymore!) and started my research.

“Best electric scooter” turned up a ton of results – it’s a lot like how every pizzeria in New York claims to have the world’s best pizza. There’s a lot of talk, but not a lot of proof. What was I, a lowly college student, to do? Well, I turned to the reviews, and they were actually pretty helpful. After reading quite a few, I confidently purchased my first electric scooter: the Swagger e-scooter from SWAGTRON.

Immediately, the Swagger made the biggest difference to my day-to-day. My cross-campus commute went from being powered by my own two feet, to a 250-watt motor. I was probably averaging, by again my own feet, an average of 2 to 5 mph. With the Swagger, I was zipping everywhere at 15 mph – even up those steep hills I had been cursing all year.

I got to class ten minutes early. I arrived at work fresh and promptly on-time, instead of looking like I had just left the gym. I drove way less, and I was able to leave my car parked for days at a time while I simply recharged my scooter’s electric batteries. I even avoided unsightly clutter by plugging in the charger beneath my bed and stowing the scooter underneath until my next ride – and it was ready and charged for me!

I used my scooter all four years of college, and even kept using it for my first adult job in San Francisco. And to my surprise, I wasn’t alone! There are many young professionals in the Bay Area living and working, but no longer able to drive to work. Lack of parking, congested streets…the list of reasons goes on. Using my favorite e-scooter, I was able to speedily reach the BART, fold it down, and take it on the train – and I spotted many similar aged, working commuters doing the same…some even using a SWAGTRON Swagger as well! 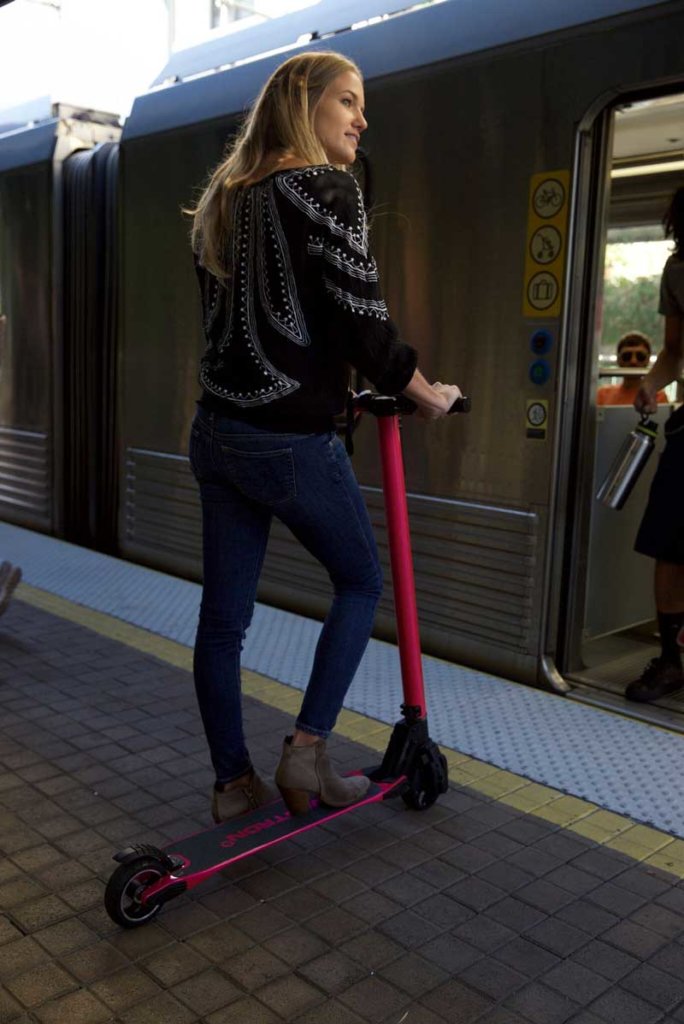 Could the Swagger e-scooter be the perfect commuting tool for you?

Do you travel a lot? Take the train or bus to most of your destinations? Or do you often park far-away and have to walk to your final destination? Well, you don’t have to. A foldable e-scooter just might be the solution to your commuting problems.

The Swagger is a durable and capable traveling companion ideal for any commuter. It can tackle most crack and bumps in the sidewalk, and can maneuver smoothly on any asphalt street. Able to reach speeds of up to speeds as fast as 15 mph, the Swagger will get you where you need to go, as fast as you need. Easily folded and carried – this e-scooter is perfect for anyone who boards a bus or train on their everyday commute.

The Swagger additionally serves as an alternative to expensive electric cars or spending precious minutes scouring parking lots of r seldomly found spaces. It has a remarkably short learning curve and is definitely the friendliest rideables to use – who didn’t own a simple kick scooter as a kid? The transition from your dinky, push scooter to an electric one is a no-brainer.

Designed with a backlit LED display, this scooter easily helps keep track of battery life, current speed, and total distance covered. To guarantee optimal well-being for all riders when it comes time to come to a stop, this e-scooter also comes built with both manual and electric brakes. 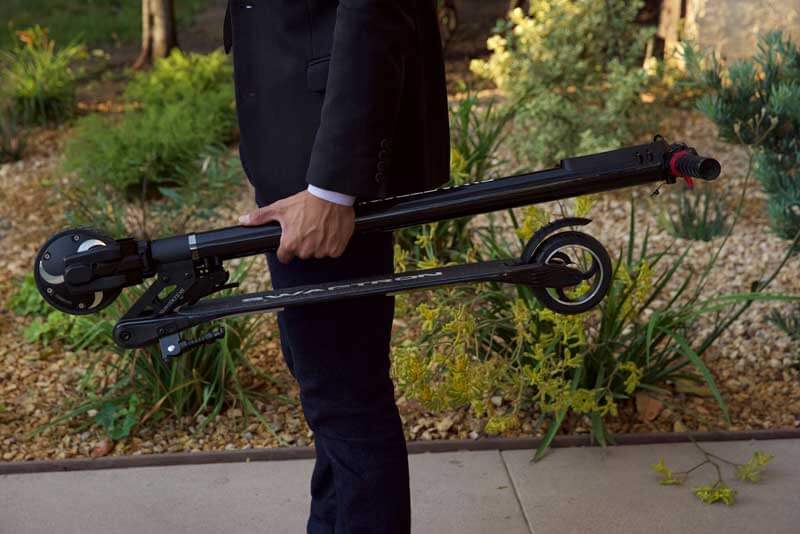 After years of using my electric scooter, I can’t recommend one enough.

If you have to show up at work in a pristine suit and can’t risk looking like you just left a rigorous CrossFit session, I urge you to look into a Swagger.

If you’re a student constantly late to class because you had to walk three miles to class from some far-off parking lot – don’t wait. Save up, and grab yourself a Swagger.

It’ll be the best investment in transportation you make.