Ever since the premiere of Back to the Future II in November of 1989, the mainstream public has been understandably obsessed with the idea of levitating boards. And, I mean, it’s not hard to get why–a floating skateboard without wheels? Who would turn that down?

And the way Marty McFly literally performed the hovering equivalent of a rebellious Tony Hawk, well, that didn’t hurt either.

After watching actor Michael J. Fox escape the clutches of his timeless nemesis, it’s fair to say we’ve all been dreaming of owning a floating transportation device of our own. Especially when the year 2015 rolled around, and there were still no signs of real-deal hoverboards.

Then, around late 2015, the self-balancing scooter glided onto the scene.

It took retail stores and online vendors by storm. By Christmas time, it was on almost every kid’s wish list. Major celebrities rode them everywhere–on set, at home, to a party…

You couldn’t go anywhere without seeing one or hearing the popular nickname its riders gave it: “the hoverboard.”

This affectionate moniker, though, caused a few ears to perk up. That name has been reserved for McFLy’s iconic board that had inspired the minds of an entire generation of future engineers in the 90’s!

But why exactly did it stir up so much ire from the Back to the Future aficionados?? The issue a lot of people immediately took with it can be settled into two large camps and one lesser one:

1. As the Washington Post adamantly pointed out, they don’t actually hover, they roll. Something many people cling to ardently in the comments section online.

2. Another straightforward complaint, to quote George Watsky in the song Brave New World, “It’s got wheeeeeels” (at 2:10). The self-balancing scooter glides on a pair of wheels, giving the graceful illusion of hovering.

3. Almost forgotten in the analogues of cinematic history today, but back in the 1990’s this lesser known event helped shape the modern mindset of the conventional hoverboard imagery today… It didn’t help that Back to the Future trilogy director, Robert Zemeckis, literally added fuel to the fire by claiming (not just once, but multiple times, even in the film’s commentary) that the hoverboards used in his film were 100% real, there were no special effects used!
“Hoverboards have been around for years, but parents’ groups worry
that kids will get hurt, so they’ve pressured the toy companies not to put
them on the market,” Zemeckis claimed. “We got our hands on some.”

However, these statements were proven in many interviews later with actor Michael J. Fox to be false–Zemeckis it seemed was weary of answering the constant hoverboard questions and decided instead to have some fun with it. He did, however, set up expectations that A. hoverboards were an achievable technology and B. hoverboards should handle and look exactly as his fictional Mattel boards.

But other than those three single-minded details, you’ll be surprised at just how similar the two may actually be! Decide for yourself after reading these cools facts….

Let’s a take a closer look!

Well, we’ve covered the fact that it doesn’t levitate off the ground using magnetics of any kind, and that it does in fact have wheels. Check, check, let’s take those off the list.

Self-balancing scooters are, well, more similar to scooters than a skateboard. They handle very similarly, even if they don’t have handlebars.

If you take a closer inspection of the 1989 Back to the Future hoverboard, it has a strap for you to pop your foot into–the self-balancing scooter doesn’t do that. And why would it? If you need to get off your board in a hurry or you’re about to fall, why would we want you to literally be stuck to your board? That’s incredibly dangerous!

Another difference between the fictional version and the hoverboards we have today? You still have to push it. If you watch Marty McFly in the movie, he’s still propelling the board himself. He’s pushing off on the ground every few seconds. Ours? Well, other than adjusting your feet to steer with the pressurized footpads, well, you’re basically gliding around town with very little effort–other than keeping your balance, that is!

So, what works? What makes the present day hoverboards worth it?

Well, just that, you may not hove, but you glide, the board is self-propelled and rechargeable, and completely eco-friendly. It’s the closest we have come to the real-deal hoverboards hitting retail shelves and you look just as cool as Marty zipping around on one of these (you know, if you get really good at it!)

So…why don’t we have hoverboards ready for consumers to buy? We’re ready!

While many, many people wouldn’t hesitate to buy their very own personal hoverboard and fly down the street to Doc Brown’s house…we just aren’t really there yet.

There has been a lot of excitement shrouded around on the internet about various “real hoverboards” in development, but they are just that–being developed.

The ArcaBoard caused a ton of buzz a few years ago…but at $20,000, it’s definitely not ready for your average joe to purchase at Target.

The Lexus-made hoverboards are required to stay on specially designed tracks, like a train, and are powered by “superconductors cooled by liquid nitrogen” and bottom out pretty easily. They aren’t ready for anyone to take to the streets, and certainly don’t have any of the flair or whimsey as the pink and green Mattel board in Back to the Future. 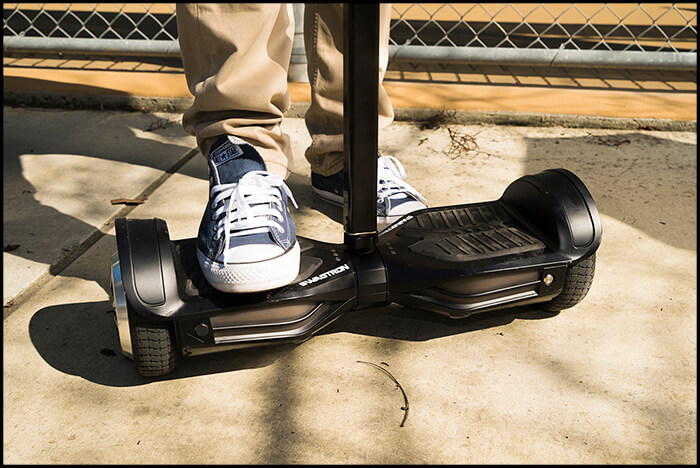 The closest anyone has really come might just be Hendo, who developed a board that can levitate on specific surfaces–even Tony Hawk rode it. It works, but it’s clunky and is hard to ride. If you watch the video, it looks akin to riding two Roombas welded together. The board is in beta with no foreseeable release to the public–but the technology is out there.

So, what should we do?

The self-balancing scooter is a good, fun alternative while you wait for your levitating skateboard. It’s fast, sleek, and affordable.

But, if you’re looking to keep your feet on top of a board that resembles a more futuristic version of a traditional skateboard, we’ve got you covered here:

They have all the style, panache, and straight up innovation as McFly’s floating whip.

With electric skateboards, you can maneuver yourself just like on a regular board, but reach speeds up to 18 mph (you know, depending on the make and model). And they just look so dang cool. You can grab yourself a snazzy looking Voyager electric longboard, or even the time-tested and loved Swagboard.

We might not be able to levitate just yet, but you can glide up a steep hill without putting your foot on the ground. And what’s cooler than cruising uphill without pedaling? Pretty much nothing….