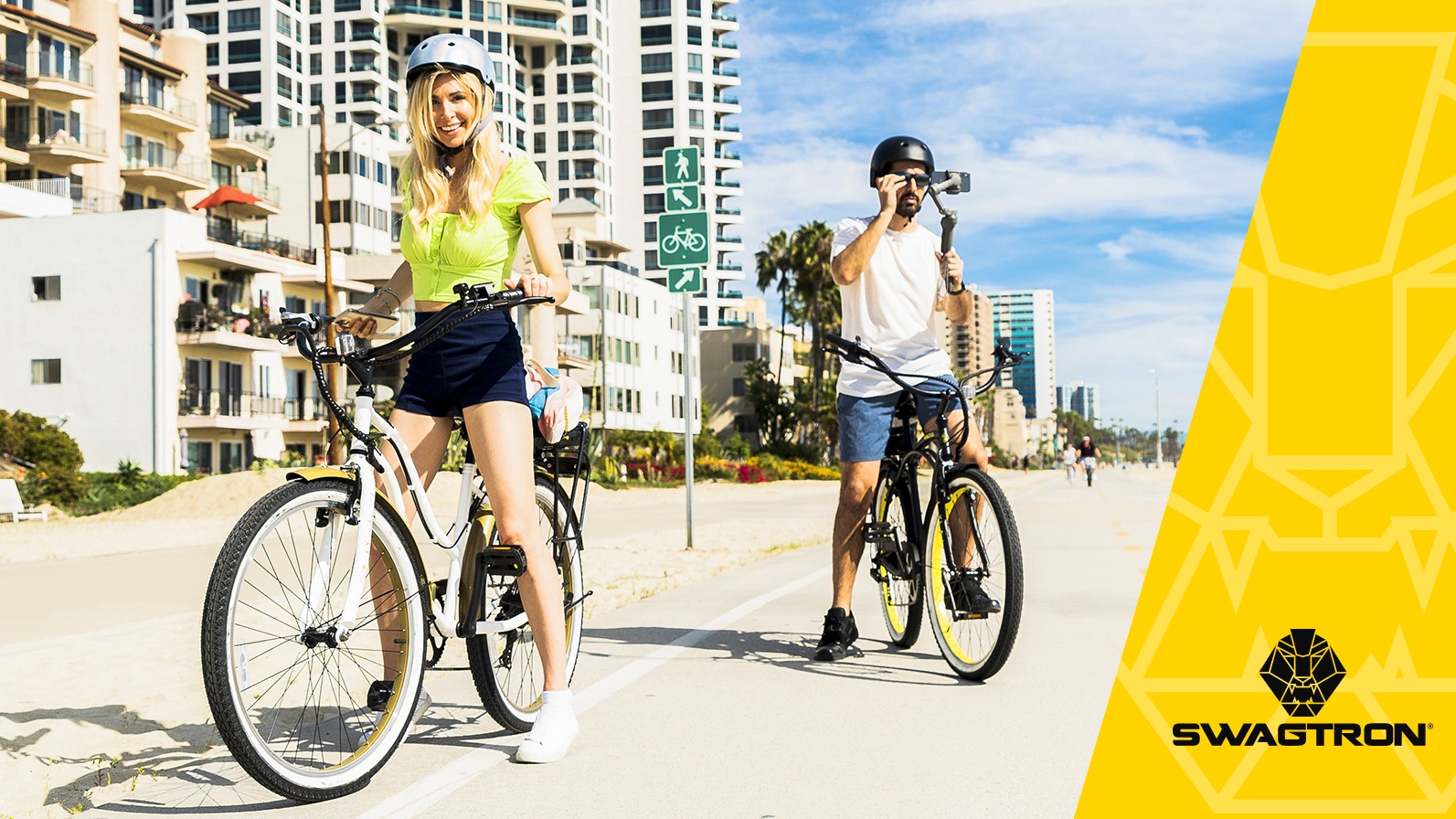 1. Electric Bikes Can Help You Stay (or Get) Fit

Unlike motorcycles or cars, electric bikes encourage you to get out and burn some calories while you’re riding. Not all the way, of course. When you’re fighting your way uphill at the end of a ride, you can be grateful for the powerful electric motor most eBikes have linked to the rear tire. On flat roads and slight inclines, however, an electric bicycle uses pedal power just like the Huffy you rode when you were just a kid yourself.

The act of pedaling, even with an electric bike, burns off calories and can help build muscle with healthy aerobic exercise. Even better, the short breaks you can give yourself by coasting on electric power alone give you a breather and may actually encourage you to ride more and harder than a non-powered cyclist would, which naturally burns even more calories — think interval training.

2. You Can Carry an eBike Just About Anywhere

Powered bikes are generally about the same size as pedal-powered bicycles. This makes them almost embarrassingly easy to carry around and to store anyplace you have room for them. Many of them are in the same weight range as bikes too. Even the heavier models can be walked through a lobby or into a bike rack, where they can be secured with a regular bike lock. And many eBikes – commuter or otherwise – have made it a point to deliver added portability by making the bike foldable. So something like our EB5 Pro City & Campus eBike can be folded and sit next to you on the bus or in class. 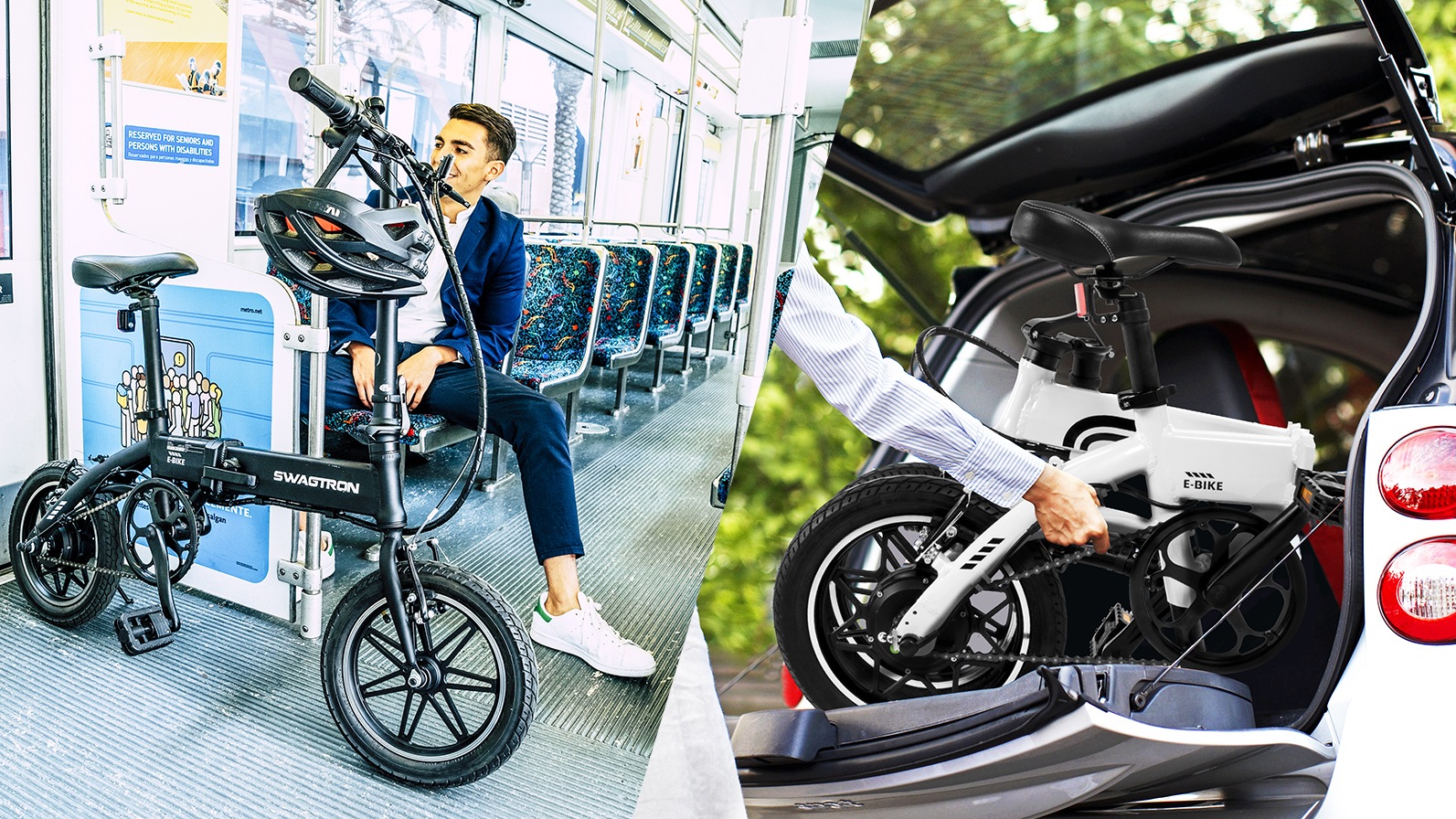 Split-screen image: Man sitting on the bus with his EB5 eBike next to him, and close-up of a folded EB5 being placed in the back of a trunk.

If you live in the city or if there just are a lot of “no parking” rules in the countryside where you live, eBikes could be the only reasonably parking option you have. And even if they aren’t, it’s easier to stash an eCycle in your garden shed than a Toyota Prius.

3. Spend Money on What You Really Want — and Need

Most eBikes aren’t just fun; they’re potentially a replacement for your daily commuter vehicle. Even if you only drive 5 miles to work or school and even if your daily road machine is something super-efficient like a 40 mpg Prius, you’re still probably spending close to $200 a year just for the privilege of a round trip each day. In a less efficient car, with a lengthier drive or in one of those areas where gasoline is crazy expensive, you can expect to pay quite a bit more.

Because most eBikes are battery-powered, your options for charging it are almost unlimited. Plug your eBike into the wall of your garage overnight, and you can hit the road in the morning with a full charge. Home electricity is generally cheaper than gasoline, so you’re already ahead of the game. Better still, the efficient Li-ion batteries most eBikes use can charge up in as little as 4 or 5 hours. You can just plug it into the outlet at work or the campus bookstore and be back up to a full charge by the end of the day. Most offices and schools are so happy to have one less parking space taken, they’ll let you plug in your electric bicycle wherever you need to.

Swag-Tip: Grab an eBike with a removable battery and you have even more options for recharging your bike’s battery. The EB12’s battery, for instance, can be charged while attached to or detached from the bike itself. You could feasibly have two batteries charging next to you at your desk while you work.

Either way, you’re saving money on fuel costs. And that means more money in your pocket to buy the things you really need – and want.

4. Help Save the Environment

Speaking of fuel cost, your eBike is also fantastic for reducing your carbon footprint and making your rides eco-friendlier. In most cases, the electricity you pull from a socket to recharge the bike is probably cleaner than the gasoline your car is burning. The relatively low need for oil changes and other chemical additives to the electric motor of an electric bicycle also tend to keep pollution to a minimum.

So, your eBike is healthy, affordable and maybe can help us keep the glaciers around a little bit longer. Are there any other eBike benefits to speak of? Of course, there are. One of the biggest reasons for choosing an eBike is that it’s fun.

Typical eBikes are just the right size for the bike lane, so there goes half of your daily stress right there. On top of that, many models are tough enough to go off-road. As much fun as mountain biking is on a pedal-powered bicycle, it’s even more fun when you’re at least faster than the average bear. In some places, you can even ride an eBike on the pavement — the joy of which speaks for itself in crowded cities.

Animated GIF of the benefits of eBikes vs. automobiles.

6. What Are Your eBike Price Options?

You’re not limited to just one model of eBike, either. As with cars and bicycles, you can choose the kind of electric bike you want based on how you plan to use it and your budget. Basic eBike models can be had for around $250 to $500. Some sellers, notably SWAGTRON®, also offer in-house financing plans that can have you paying as little as $47 a month for your eBike. Higher prices buy you more eBike, with premium models coming in around $1,000.

You also have a choice of different models for city, suburban and rural riding. Large, powerful eBikes are good for rough terrain and the kind of places where you might have to cross a shallow ditch or muddy puddle. More compact units are a dream in city traffic. Look for a foldaway model if you expect to be carrying the eBike up a flight of stairs to your office. Check out our ebike for sales to choose an electric bike that’s best for you.